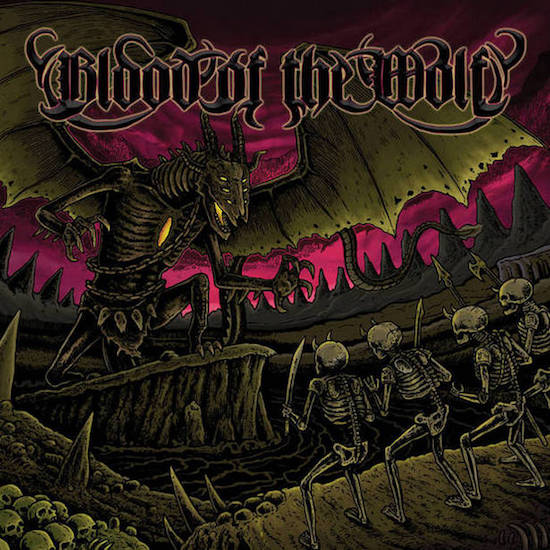 Chicago blackened death metallers, Blood of the Wolf have a new EP tucked within its jaws, due out November 8th, 2019 through HPGD Productions; III: Blood Legend. I listened to their compilation released sometime in 2018 but never got around to reviewing it due to the availability of time. It is a collection of their debut and sophomore albums I: The Law of Retaliation and II: Campaign of Extermination which I hope is reissued on CD or vinyl sometime. Take a listen if you can and you will find a home within their torrential winds of barbarity. Their blackened taint over the death metal is what makes them sound so furious, you have a drummer hitting the snare as if he is on speed or trying-out for some kind of drumming Olympics, a guitarist doing lead somersaults, a vocalist possessed by the sonic beam of Adam Nergal’s and Adam Buszko’s chords and a bassist having to jockey around each step precisely. Cannons are fired relentlessly while in pursuit of some new level in extremity. If you have heard either of their full-length records think of III: Blood Legend as a step closer towards annihilation.

These 4 tracks have precisely what I know Blood of the Wolf for, victory-crying landscapes met with the brutality of the band’s technique. Coming in at above 17 minutes III: Blood Legend is war being declared, military face-paint is applied, boots are laced up and guns locked and loaded. Vocals here are impressive and go head to head with the drumming; while the highlight displays are invoked on ‘Son of Blood Oath’, ‘Progenitor’ and ‘Fire Serpent’, all of which erect towers with banners rolled-out showing the band’s best assets. Their aggressive tonality mixed with contrasting playing speeds to establish a believable mood and that onward-upward ascent their music is often times fetched amidst the words of peril being preached by the frontman. Blood of the Wolf sincerely made III: Blood Legend a special EP, the replay-value is high, hence you barely even notice the rate at which the tracks go by.

If you missed out on the opportunity to get their compilation which was limited to 100 copies on HPGD Productions then this is your chance to own something of theirs. You may want to act quickly because the copies this time around are of the same quantity, unless you're willing to settle for III: Blood Legend as a digital download. Either way get this record if you’re a supporter of Marduk or Hate or anything along the lines. I perceive Blood of the Wolf to be one of those underground bands kept secret for too long given the limited availability of their music on physical formats, which is both welcome and a bit of a shame as I believe they may be doing a significant injustice to those who may want to support the band through tangible musical purchases. Either way III: Blood Legend is an EP that does not disappoint, you would be doing yourself a huge disfavor by not attempting to get this at least digitally. If this is a taste of what lies ahead then we are in for a treat.