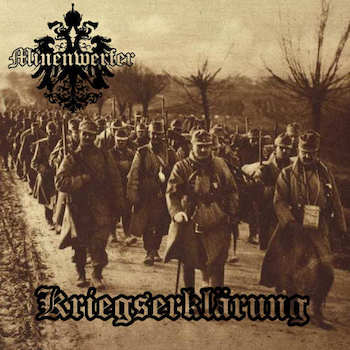 On 14.12.1915, a speech by Emperor Franz Joseph was recorded. In it he expressed his warmest wishes to the armed forces of Austria-Hungary. It is a rare document of his voice and it opens the first track of “Kriegserklärung” or, in English, “Declaration of War”. By the way, it reminds us that the Danube Monarchy played a very important role for the outburst of the World War I. Their thirst for revenge – after the assassination of the Austrian heir to the throne (and his wife) - brought German Reich in a quandary. Either they would lose their last reliable partner (the assumed fickleness of Italy soon became real) or they would support Austria on its dangerous mission. We know the decision only too well.

Less known is the quality of “Kriegserklärung”. Minenwerfer attack with full force. As soon as the intro speech has faded, their musical scenario embodies the hail of bullets that the soldiers on both sides had to face in this first mechanized war. It’s a murderous soundtrack for the mass extinction, but it is executed with great technical precision and the necessary (small) quantum of melody. Especially “Haubitzen vor Belgrad” finds the perfect balance between sheer devastation and a few moments of light. Its dynamic tempo changes work perfectly and the solos commute between violent insanity and surprising mildness. But the most unexpected element is the virulent, audible (!) bass. Its sounds crash into the imaginary enemy positions like shots from Big Berta. “Granatenschock Selbstmord” (what a title!) can show you that this statement is no exaggeration. Needless to say that my German mindset likes the fact that the dudes from Sacramento write lyrics in my mother tongue. But all those who do not understand this beautiful language: you miss nothing, because the voice is distorted, full of reverb and completely incomprehensible. Moreover, it has to struggle to be heard in view of the thundering instruments.

Okay, the pseudonyms of the guys sound like a bad parody. “Wachtmeister Verwüstung” is ridiculous, the other ones are of the same category. It doesn’t matter. At least the first three tracks offer nothing less than a first class inferno. It is almost surprising that the Panzer Division Marduk does not join the battle. But the lyrical war theme leaves no room for “christraping” legions. Anyway, the riffs and the velocity lie in close proximity to songs like “Blooddawn” without copying the success formula of the Swedish flagship.

The German Reichskanzler von Bethmann Hollweg was not well advised when he assured Austria-Hungary of the Teutonic support. But my advice for you is to buy Minenwerfer’s full-length “Vorleben Erinnerung”, because this compilation houses the whole “Kriegserklärung” EP. The original version is hardly to find, I guess. But let’s get back to Kaiser Franz Joseph. He died in 1916, so he did not see the end of the war anymore. In 1918, Austria’s part had become a minor role. Now the whole damned war was the guilt of these bloodthirsty-by-nature-Germans. Versailles made it possible… and aggravatinng the situation, no Minenwerfer EP could give comfort to my ancestors.