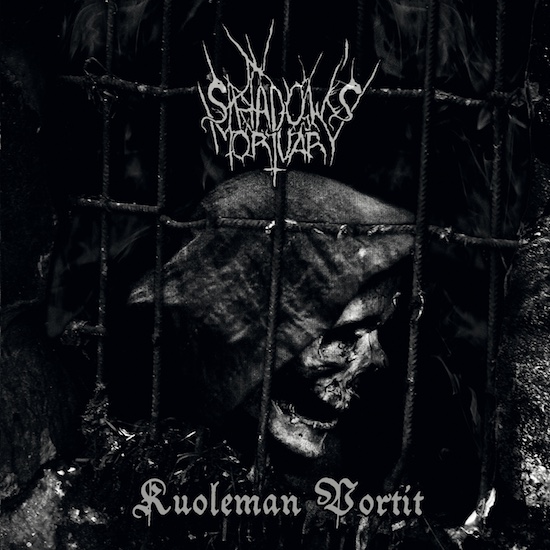 I admit it, I'm thinking about standardising my reviews, because I've noticed that pretty much everyone has the words "black", "metal" and "Finland" in it anyway. I'm just not sure if I'm breaking any guidelines. But that's also because I'm in Germany, where for a few months now, thanks to Corona and the fucking government, no one really knows what's allowed and what's not. Probably listening to Finnish black metal is already forbidden, too. Therefore please read the text only in an isolated cell and in a conspiratorial mood.

So, what music awaits us in the case of Shadow's Mortuary? Sensationally, it is, you guessed it, black metal from Finland. Kuoleman Portit is not exactly brimming with individuality, because the record could well be considered a forgotten Azaghal album for long stretches. The four guys from Suomi don't break any records in terms of quantity either. With a playing time of 31 minutes, the record seems somewhat undernourished. But if you are only interested in quantity, you can buy a boxed set by Avantasia (and vomit for days after "enjoying" it).

Shadow's Mortuary are certainly not among the most popular noise makers from the land of a thousand lakes, and maybe that's right. Their performance lacks a little of the deep black elegance of bands like Aegrus, whose compositions, for all their power, often reflect a musical eloquence as well. In addition, the gentlemen from Oulo are a little less atmospheric than, for example, Malum. Nevertheless, there is a lot of good material on Kuoleman Portit. Admittedly, the order of the songs is a bit unfortunate, because the first tracks don't have the power to thrill the listener immediately. They are solid yet unspectacular in both velocity and guitar work. But the guys are tough fighters and increasingly go all out the longer the album runs. Just listen to the thundering of the guitars at the beginning of 'Ouroboros', the last track on the album. It returns after just under two minutes and gives the song a merciless note, although large parts of it are more in the medium-hard range.

'Ruoska' basically works the other way round. After a pleasing guitar line at the beginning, the Finns pick up the pace and the energetic shrieking of the lead singer underlines the viciousness of this track. However, this is not an isolated case. The good man at the microphone masters his two to three different tones virtuously and that is enough in the context of this maelstrom of infamy. Between these two songs, the title track has made itself comfortable. A wild eruption of anger and hatred pours down on the listener, driven by a drummer oscillating between fast and very fast. His blows give the piece a brutal dynnamicism. It may not (yet) be the norm with Shadow's Mortuary, but here they have undoubtedly succeeded in creating a first tier Finnish black metal song.

Kuoleman Portit sounds rough, somewhat barbaric and dirty, without revealing any tendencies towards black thrash. It's just a good, sinister record loaded with negative energy, which offers more of the same, but in an excellent way. This is also illustrated by the fourth song, for example, a relatively short punch in the face - and the fifth track, the vehement 'Soihdunkataja' is in no way inferior to it, on the contrary. But I just noticed: "good", "sinister" and "negative energy" are other terms I almost always use. I will have to tackle the issue of standardising my reviews. Not least because Suomi black metal is also standardising itself in a certain way. On an extremely high level, of course.