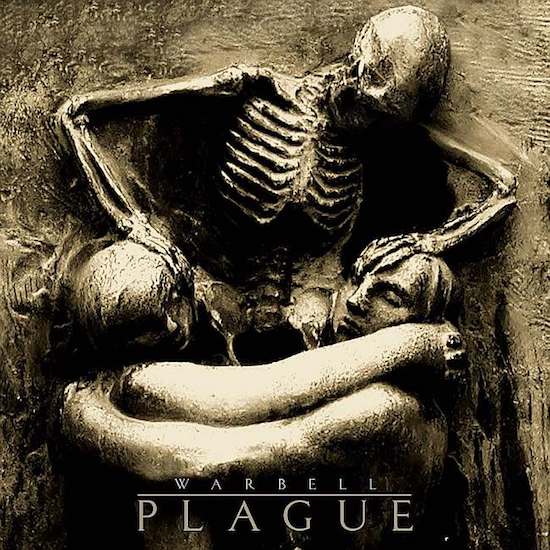 Polish melodic death metal band Warbell makes aware their presence with the chime of the bands second full-length effort Plague. It's modern melodic death metal, hence it took some convincing before I could even summon the thought of even looking at the cover artwork; I decided to give this one a chance despite my aging impatience with the disgraced sub-genre of melodic-death, and for what is represented here on Plague I was surprised I even made it through the record without nodding away before the inception of the 2 track, and even going as far as having a repeated listen. As a whole Warbell sound like an echo somewhere between Aetherian, Insomnium and Duskmourn (minus the folk elements); heavily driven by contrasting tempos and purposeful guitar work reminding me of when I first heard a band like Insomnium. A few good memories, though most of what the sub-genre resembles is a mockery of early 90s melodic death metal. I'm glad to have been awoken to the ringing of Warbell.

Two fists go to battle on Plague, that of pessimism and optimism; one forever reminding you of your faults, sins, regrets and the approaching end; the other compelling you to cast aside dejection and embrace a new beginning. The latter is easier said than done thus Warbell make it evident through ‘Dualmind’ and ‘Every Storm’ (to name some examples); sometimes a mighty adrenaline shot of courage, other times a soaking wet blanket of despondent reflection and enfeeblement. These two primary forces go head-to-head on each track among also present references of mankind’s inferiority and ignorance, altogether making Plague a record worth the listen, though significantly shorter than their debut Havoc by 17 minutes or so, the members drive across the desired effect with precision every time. Not too despondent, not too aggressive; steady hands manipulate the energies emitted on Plague.

Marcin and Piotr lay down great guitar solos and leads, most of which is the least appealing and gives each track an identity to remember it by; barely any filler to be heard, hence you don't encounter directionless music. Karolina's vocals are some of the better I’ve heard by a female in the melodic death metal sub-genre compared to the laziness of Arch Enemy’s front woman that the unfortunate masses praise. She translates emotions of agony and despair through her deep growls that at times may carry a blackened snare of undertones. Paweł handles the bass along with some supporting vocals on the record aligned with Rafal’s well timed drumming, moving between metalcore, thrash and melodic death metal. Noticeable is the effect of teamwork on Plague; the momentum is kept and there is never an instance which sounds like one member is the driving force behind the music, every hand carries some weight. ‘The Fallen’, ‘Flames of Truth’, ’Wolfpack’ and ‘The Passenger’ act as key moments on Plague in linking many segments thus, ensuring the targeted goal is reached, that being cohesion.

Though melodic death metal has not been in the best of shape by a longshot for some time now, its bands like Warbell that provide some hope the genre still has a shot at relevance. Give Plague a listen, perhaps there is something there for ears weary of cheered mediocrity.