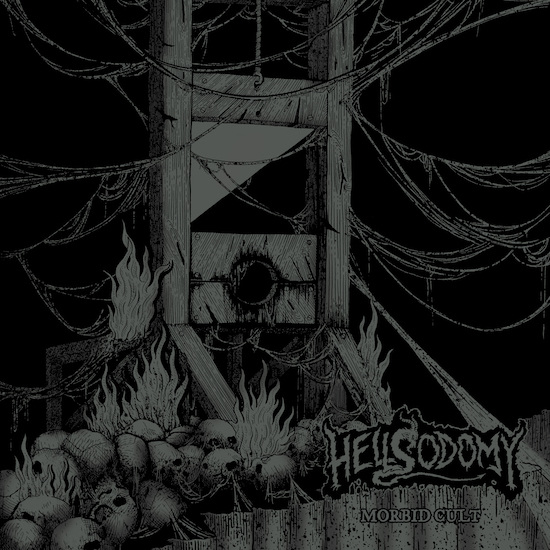 When talking about extreme metal, I think we can all agree that Turkey isn't the first country the mind wanders to. There's no denying that the country seems to have a small, but fertile underground scene, with bands like Godslaying Hellblast, Decaying Purity and Cenotaph among others. It is from this scene that Hellsodomy comes storming, a band with a couple of releases under their collective (bullet)belts already, but still seem to be delegated to the status of being an insider tip. Undeservedly in my opinion, because this shit is just awesome!

Hellsodomy's music is an acidic concoction of thrash, black and death metal, that keeps the intensity levels high throughout this album. Their sound has me thinking of pioneers of the style, with influences from acts like Destruction, Infernal Majesty, early Exodus, Sarcofago, Possessed and early Sepultura all vying for the listener's attention, delivered in a contemporary execution, further beefed up with influences from acts like "De Mysteriis ..." era Mayhem, Deicide and Marduk. The riffing is near lethal, with blazing solo's interspersed, and the tempo is kept high for the most part, only releasing the throttle for some well placed breaks. The drummer pounds his way through proceedings at blasting speed and with thrashy polka beats, propelling the vicious black/thrash/death forward without mercy, only loosening the accelerator to allow the listener to take a few breaths before bursting forward again. The vocals have me thinking of bands like Repulsion, Terrorizer or a more guttural Mille from Kreator, and they add even more menace to this highly volatile cocktail. Hellsodomy manages to fuse together extreme thrash with elements from both death and black metal, retaining the flow effortlessly throughout. The production fits the music well, making the music sound powerful and menacing, yet clear and well-balanced, without being over-produced. This is a mighty offering of extreme underground metal, aggressive, well-played and oozing with power, sure to please all into like-minded acts such as Bestial Mockery, Slaughter Messiah, Hell-Born and Blood Storm.

Together with the Meshum promo a while back, this album is one of the most awesome underground metal releases I heard coming from Turkey. The country's extreme metal scene seems to be reaching a boiling point, and I can't wait to see and hear what the future will bring from those shores. Judging from what I've heard so far, it's destined to be total aural annihilation!