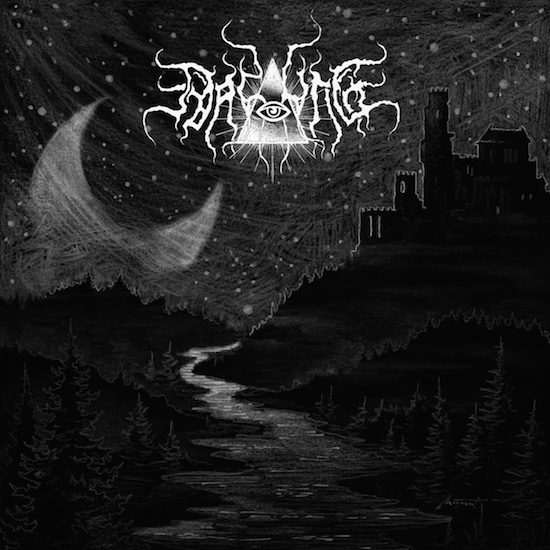 It was hard at first to contemplate and grasp what Nachtig was out to accomplish with this album. Either this was going to land and remain on the depressive side of the black metal spectrum or it would steadily evolve and move towards something else. 55 minutes of sullen melodies is not what I think of when I hear the words black metal, but even in its most loose of forms such as on the album being far from my customs, the hopes I had for it were not spoiled. This is not a very adventurous album to say, but it does mingle with the idea. It also proved difficult trying to set the album aside from the DSBM categorization given its strong resemblance alluding to the problematic sub-genre I loathe, thus compelling me to listen under the impression no such sub-genre of black metal exists. Even more tedious was listening past the first three songs but not for the reasons you would imagine (bad, repetitive, directionless) none of those apply; instead falling for the marvel of towering keyboard and guitar harmonies.

The first three (3) songs play like they are attached to each other barely loosening their grip of the melody set by the opening track ‘Der Tag Bricht An...’ and even when drifting away from such through dramatically slower tempos in certain areas, find their way back to the dreamlike atmosphere instigated as the opening and primary framework of Nachtig as an album. Hence separating the songs does not work because they mimic connectivity to each other. As a result, you get a projection of where Nachtig would be taking the self-titled record. ‘Die Waldhexe’ does more of the same, keeping that mid-pacing to drive home the ambient and atmospheric beauty called into effect early-on; therefore, most of the album’s length reiterates the ambient, slightly melancholic and dreamy cover artwork.

The songs may seem way too long for the average listener, however, if you’re able to endure the mountainous track lengths, for your sacrifice you will gain peace of mind as you voyage towards the final track ‘Der Letzte Weg’, bringing the dim-lit revelation to a curtain call. A bit more optimistic sounding yet depressive value is met but not overdone to steer away. The musical tones are quite diverse on this one given the sporadic changes in momentum to either establish downcast, or for a while challenging the mournful echoes with buoyant accentuations. As a whole Nachtig is enjoyable, nevertheless I suppose some songs could have been much faster to rival the overcast atmosphere to give the music deeper or more noticeable contrast.

For the pacing to be this slow throughout the album’s runtime was unnecessary given the setting or rhythmic stance and construct of Nachtig had already been a fixed statement of the first two (2) or so tracks. It seemed to be heading towards a second wave Scandinavian black metal firestorm some instances but never carried through. The recordings are boldly conventional through a linear cortège and alignment with raw/ambient black metal; hence still appealing to those who fancy the vigorous approach. A Purity Through Fire release, Nachtig takes you through a forest of weeping landscapes all the while glorious to the journey ever-long; drenched in agony and obscurity, a footing steered by gloom and paced in sorrowful resonance.