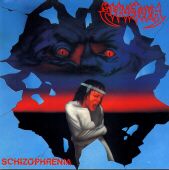 Type: Full-Length
Release Date: 1987
Label: Roadrunner Records
Genre: Death, Thrash
1 Intro
2 From The Past Comes The Storms
3 To The Wall
4 Escape To The Void
5 Inquisition Symphony
6 Screams Behind The Shadows
7 Septic Schizo
8 The Abyss
9 R.I.P. (Rest In Pain)
10 Troops Of Doom

Before the Roadrunner deal, Sepultura were still a band who could afford very little and couldn't even tour outside their homeland. This cd shows a lot of maturity in the bands music and the production is much better this time around. The songs are heavy but also have a little catchiness to them as well. This is a great thrash record and is very impressive for still a relatively young band. Andreas Kisser joined the band prior to the recording of this album and his talent shine through on this release as well. The intensity is up a notch and the quality is too. If the band only knew what was in store for them for the next album...(see review for Beneath The Remains)

Bottom Line:Great speed/thrash metal cd. Any and all Sepultura fans need this album!