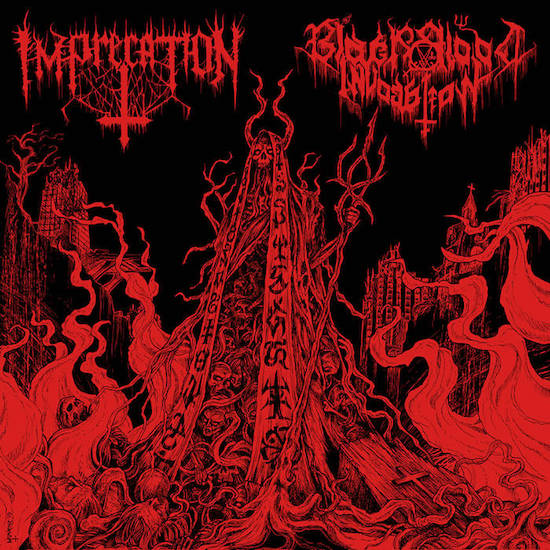 Imprecation has been on a rampage in 2019, having released their 2nd full length album Damnatio Ad Bestias while ex member Danny Hiller has been active in Oath of Cruelty's upcoming act of barbarity "Summary Execution at Dawn". Now as the year comes to a close Black Blood Invocation has joined forces with the Legendary Imprecation to fortify an already bleak underground kingdom. Each offers their hand in travesty for this split due out on Helter Skelter Records. Imprecation as always being the calculative beasts they are, lay their corrupt compost to the soil as a fertilizing agent for what is to sprout. 'A World Consumed in Fire' brings all that is Imprecation; damned gutturals, riffs to slash and a drumming to impale. Not as bassy as I would have liked but such a complaint is insignificant to the might of their tunes here. After the fumes have settled, 'Swine Full of Maggots' puts the doom to work, only as a precursor for the destructive blast beats and mid paced, keyboard-caped pounding. There's some level of drumming and riff technicality to keep things fresh on 'Emperor of Eternal Spirits' which is for me the best of the Imprecation side because it reminds me of their 90s work. Coming off the steam of Damnatio Ad Bestias I would not have expected less nor was I given.

Black Blood Invocation on the B side of things put into effect some of the best black/death metal hymns I have heard all year. Adding their decor to the desecrated medium they open proceedings with 'Congregation of Profane Ascension' that bleeds into 'Evocation of the Alla Xul' and it was with that track I could tell Black Blood Invocation were among the bands to keep abreast with. What they bring to the table here encourages restlessness; because they have merged Beherit and Profanatica with their own lawless ways, I could not be more thrilled about a full-length release to come from this band. I love the drum fills heard on 'The Burning Effigy of Moloch', the diverse vocals, the riffing the keyboard structures grooving slowly into the framework of the tunes and the overall presence they evoke in contrast yet conspiracy with the muscle of Imprecation. Favorite track off Black Blood Invocation's side, 'Atazoth Nexion', I won't spoil it for you, but you'll hear why once the needle hits that sector. Loud and with the bassy punch for longevity; it would be inexplicable for a full length not come from Black Blood Invocation. Both bands brought their A game to concoct this dosage of duress. Something of this nature would be better experienced on vinyl so there should be no second guessing about getting it if you can.