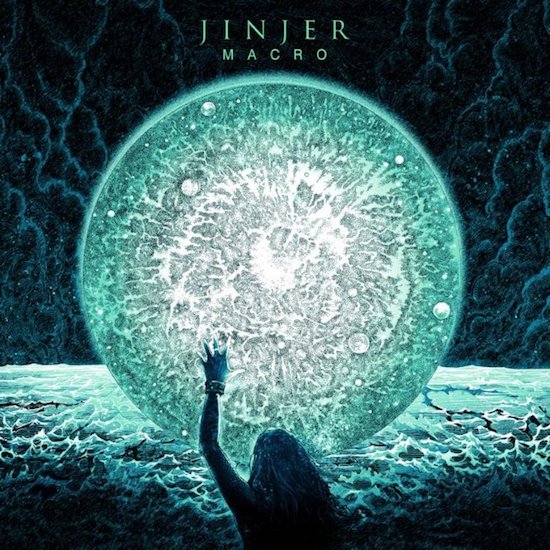 Djent is probably my second favourite, after slam/deathcore, subgenre of metal. Most probably because I can see the most development in these two, there are constantly new bands appearing in both that invent something new, add new flavors. And Jinjer is also interesting representation of a trend that I find most interesting amongst metal bands - increase in number of female vocalists. Almost each subgenre has at least one band now where you can hear a proof that having a female vocalist who can do both growling and melodic vocals gives their music much more variety. Arch Enemy, The Agonist, Azusa, The Machinist, Abnormality and Jinjer are probably amongst my favourite genres with last four being my favourite bands over last few years.

Jinjer made us wait a bit for their new full-length, previous one (which was my favourite until now) was released in 2016. Since then the band re-released their Cloud Factory from 2014 and a short EP Micro was released in January this year. The Macro full-length provides another proof that the band keeps on developing and bringing new things to the table, expanding elements that can be added to djent. It's again going to be difficult to choose my favourite from this genre this year, with brilliant Periphery, The Ansible or Fractal Universe as all of these bands have shown that this subgenre is probably one of the most limitless amongst metal. Jinjer is not afraid to add even some bits of reggae ("Judgement (& Punishment)"), showing that you can be really heavy band following steps of the best (really strong echoes of Meshuggah in riffs, even guitars using similar effects) with very low growling, but keeping the music fresh with interesting melodies when Tatiana is singing with her clean vocals. Guitars are being handled by only one member, with Roman playing both rhythm and lead lines, just like on King of Everything release, showing that this is their most stable line-up, with Eugene on bass and Vladislav on drums, also second album in a row.

Generally, the album provides definitely more tracks with heavy parts compared to Micro EP. Also, because we have more tracks here, it's easier to hear how versatile the musicians are, providing many interesting passages and many more interesting additions, which go way beyond the typical metal releases. We can also hear some lyrics sang in Ukrainian (track "Retrospection"). It's really difficult for me to choose a favourite track, it's just good as a whole as it's not boring, each track consists of something new, with musicians showing off their skills, no matter whether they choose fast tempos or slow, whether it's closer to metal or progressive or even jazzy bits.

To sum everything up - this album is definitely a bit challenging, it is something for a listener with open mind and specifically open to additions that Jinjer decided to put into metal. Definitely not an album for everyone, fortunately definitely for me. I appreciate the band experimenting, opening new doors with each track, exploring new regions, showing that metal remains a genre that is good to mix with anything and everything else and depending on your taste you can always find a mixture that is right for you. This one is definitely right for me and I really admire the band for showing courage to venture in so many different directions in one release. Also, the bonus, a different version of a track "Perennial" from Micro EP, entitled "lainnereP". Possibly, if it had solos it would be a perfect 10 for me.