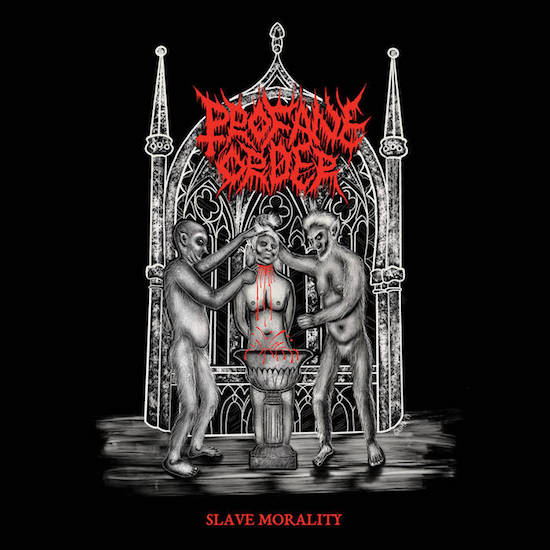 As of right now I have to scrap my top 6 war metal albums of 2019, for as the year draws to a close, I have found more releases that compete vigorously with my current selection. Profane Order joins the ranks of devout troops to set foot upon the battlefield, they're absolutely brutal band. The songs on their second full length album, Slave Morality are fucking lethal; imagine a spawn between Archgoat, Diocletian and Heresiarch, that's how much energy and ferocity is put into this record. I was on defense about it for a while and for no reason other than I felt content with what I had already heard from other bands. But being wrong is something I welcome if it means I'm getting great music.

What followed the intro 'A Barren and Everlasting Isolation’, proved my alleged content to be but a thought actively lying to my uncontrollable thirst for war metal. Once the devastating drums and electrifying riffing made landfall it became clearer I had been living in denial. This is 33 minutes of collateral sonic explosions hitting at every angle, cutting off all exits and escape routes. Manned by Illusory and TG, Slave Morality is one of the finest black/death/war metal albums of 2019. Like countless others it’s the artwork once again that I answered; not the most detailed or exaggerated image, just a candid visual representation of the sessions unfolding on 'Righteous Spawn (Of the Plague Child)’, ‘Black Vomit Desecration' and 'Ancient Blood'. Once set in motion, there is no turning back from Slave Morality, especially once you've been hit by the spear of 'War (Upon the Modern World)'. It has this wicked chugging bass guitar and tackling drum section that sums up the brutal nature of the album. The speed of the double kick (bass) and snare drum on 'Perverse Demoniac' for example, remind me of the sound made when consistently striking the speed ball boxing apparatus; that feedback you get is priceless.

The B side has some of the slower parts on Slave Morality fittingly masking some intensity while keeping the session moving in lending contrast to the agility. Also, I would argue the A side is less restrained than the B side; take 'Black Vomit Desecration' and "Antichrist Abomination' both as examples, the former is centered on propensity whilst the latter implements diversity through its 4:50 run-time. Death metal fans would be pleased to hear the solos on Slave Morality, most of it resembling some early Immolation and Suffocation stuff, and that's a big deal if you still can’t escape the embryonic 90s. 'Hexed (Defiling God's Child)', holy fuck the opening lead followed by the solo is menacing, memorable and slightly technical perhaps the strongest song on the B side where as the heavy hitter of side A declared 'War (Upon the Modern World)' is explosive. Profane Order make sure to end with a massive bang!, 'Entranced by the Morning Star', is a 5 minute butchering of the instruments comprised of electrocuting riffs, amputating vocals and thunder bolting drums most of which I understand were handled by Illusory with the aid of TG on guitars making Slave Morality admirable and a must have for all you undomesticated war metal slaves.

Slave Morality is and anointment of oppression, a death-march, a violation of sanctity.