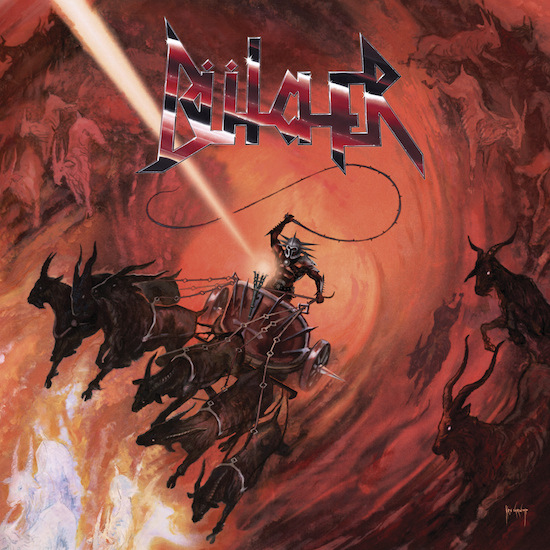 Speed metal a fusion of traditional heavy metal and thrash but way more interesting than the latter and faster than former; say it ain't so (regarding the interest factor)? Then give Bütcher’s follow-up album 666 Goats Carry My Chariot a listen. Forget horses, they’re so outdated and overrated if you ask me, goats do a far better job of transportation plus if ever you get thirsty on the way to whichever kingdom is up next for total domination, you’ve got a large supply of goat milk (666*8 ounces or so) which I’ve heard has more nutritional content than that of cow’s milk. Hence, the brave warrior is set for battle with far more than the average infantry.

Need a stamina or momentum boost during battle? No problem, your goats have you covered, simply scout out a lane for retreat, locate your chariot of goats and squirt the energizing lactose into your mouth, thus re-entering the battlefield rejuvenated and ready for the next random opponent. The last few speed metal releases I enjoyed were by Black Viper (Norway) Hellions of Fire, Aphrodite (Canada) Lust and War and more recently an EP titled "Rot ‘Em Roll" by Victim of Fate (Mexico). Let’s go ahead and add 666 Goats Carry My Chariot to my small list of speed metal albums that keep the rubber burning and the trail blazing.

Let’s inaugurate the steel and baptize it with the blood of enemies, no surprise there given the band name. A path of carnage is carved out immediately after the ceremony of knighting, Bütcher goes on a rampage with ‘Iron Bitch’ and '45 RPM Metal'. Nothing is safe in the way of these licks; battle screams and a hampering drum tantrum dismantle the battlefield with pleasure. Opening with a cracker of a song ‘Iron Bitch’, Bütcher are live and direct, unhindered and ready to do battle. The high-pitched screams and snarls of a front man sounding like he broke loose from a mental institution are backed by gyrating guitar licks all over like an ant’s nest. Speed and ruthlessness are put to test by Bütcher; however, don’t be mistaken, the songs here though carrying a chaotic criterion make certain provide a rhythm and harmony. ‘45 RPM Metal’ is a slug to the face and at the same time a warm soaked warm sheet to massage the wound.

‘Sentinels of Dethe’ does the same through well introduced, conducted and played guitar sections, sometimes leaving the listener with an impression they may be a distortion pedal short from becoming a black/ death metal band. Speaking of, the Belgians best song comes in the form of the title track ‘666 Goats Carry My Chariot’ that you could say has a Bathory-esque feeling adding to the fact most of the songs have a strong first wave black metal conductivity; merely one of the many surprises on the record. The album is all over the good places and there’s no telling what next the Belgians will do, so be prepared for some surprises you don't want to miss out on.

The music created on 666 Goats Carry My Chariot is what comes to mind whenever I think of speed metal, fast enjoyable tracks with tons of headbang effect, but this executes more than the standardized generic formula, there's lots of variation inclusive of not just technicality, soft Viking metal like passages and numerous odes to cornerstone bands make you want to revisit the album endless times. Speed metal from Belgium, I'm down to hear more.