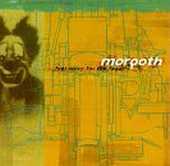 “This Fantastic Decade” was the small teaser for Feel Sorry for the Fanatic, released on a disc of the Rock Hard magazine. This song has nothing in common with the death metal tracks the band featured on their early works, but it is not too far away from the pieces of the outstanding Odium. “This Fantastic Decade” opens the album. It has drive, strength and catchiness, a good song with elements of industrial metal but without any kind of world-weariness, moaning or inadequate elements. Given this situation, it was nice to listen to this track – but simultaneously it was an act of betrayal. The opener is anything but typical for the material of Feel Sorry…. Seen from today’s perspective, it seems as if Morgoth paved the way for Ketzer, another German band that started fantastically before it lost its compass and its brain.

Feel Sorry… is a conglomerate of techno, post rock, industrial rock, independent music and maybe further styles I am not very familiar with, to express it mildly. Perhaps people who like Bulldozer’s “Dance Got Sick” wholeheartedly are able to gain something positive from the keyboard session that shows up on the fourth position. From my point of view, it’s just useless bullshit. Aggravating the situation, regular tracks like “Curiosity” also do not make my day. Yes, there are metallic guitars in the chorus, Marc Grewe does not sound very politely, and I don’t say that the song suffers from incoherence. Nevertheless, it is hard to endure the depressive, somehow drug-influenced mood of such songs, because Odium proved evidence that Morgoth can do it much better. They avoid a complete flop in view of the competently designed production and some strong melodies (“Last Laugh”, “Forgotten Days”), but this cannot conceal the crucial fact: here we are listening to a once great formation that is going astray. Marc Grewe can sing about “Souls on a Pleasure Trip” as long as he likes to do so, but in spite of the pretty intense ending of the track, my soul has been on much more pleasant trips before.

Obviously, the band wanted to break out of its musical scheme in order to find new, solvent music lovers. The atmospheric background vocals (or is it a keyboard line?) of “Graceland” sound like the light version of Graveland’s omnipresent Valkyrie-like background chants and this is just one example for the annoying fact that so many elements on this work are polished smoothly. Feel Sorry… spreads strange vibes while jumping head over heels between all stools. Dark and introvert sequences have a psychedelic touch and that’s not despicable. Nevertheless, back in 1996, Morgoth lost their integrity and, even worse, intentionally spat in the face of their following. Can’t say that I like to be treated that way.