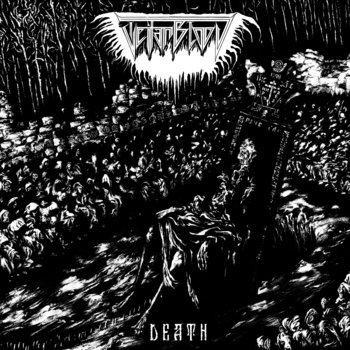 War metal. The bastard child of black and death that neither side wants to embrace nor accept. Birthed by the work of Blasphemy and nurtured by projects such as Conqueror and Revenge, among other practitioners of the art. It is as raw and brutal as it can get, yet it lacks variety and power (to some degree) which is why (again) neither side wants to accept this bastard spawn of a style. But eventually, there comes a moment where such styles are taken in a new, reinvigorating way, polished and thrown out there for everyone curious enough to see.

Teitanblood managed to do this, and even more. And with the aptly titled Death they have taken, nurtured, polished and perfected the art to a degree that I dare say no other band will ever approach nor surpass (not even themselves if I may say so).

Seven Chalices was the first proper look into the band's take on this subgenre in particular, but it was evident that it could be taken to a whole new level of abrasive, suffocating sound like no other. And boy did they managed to do so. With a formula already established, they took all that was already great in ther debut, cranked it up to 11, made it faster, brutal and tormenting. 'Anteinfierno' is the perfect opening for a record of this magnitude, with no breathing space given to you. No atmospheric intro, no fade-in. Just pure, unfiltered madness from the abyss of the world thrusted upon your ears. Hell is delivered to us in audial form, and we can do nothing but take it in.

I will admit that my first experience with this particular track was one of jaw-dropping awe. "What the actual fuck?!" was my very first impression after enduring the 5 minutes of 'Anteinfierno', my eyes wide open and my ears ravaged by the sheer experience. It becomes apparent after this first exposure that the band has crafted this album with the sole intention of assaulting your senses with a wall of noise that, very gradually and with repeated listens, dissipates to reveal the immaculate craft of this music. Layers of vocals like the most anguished, enraged howls of hell are thrown one on top of another, reciting, preaching and screaming some of the most well-written lyrics I have had the pleasure of reading. This approach is similar to what Funeral Mist did in the magnificent debut "Salvation", but I dare say they have taken the already unmatched delivery made by Arioch and twisted it into something even more perverse and furious than he could've ever dreamed of.

The guitars are very raw, thick and down tuned to match the hell that's been unleashed here, with every repeated listen revealing the simple, yet powerful riffage and musicality that this record has. It goes everywhere from frenzied, maniacal tremolo-picked rage to more down-paced doom-esque rhythms, with some random noise solos thrown here and there that actually add more to the music. The bass guitar in particular is barely perceptible given the overall sound, but its presence is noted in the weight the sound has, with some very small moment where it plays alone before the guitars join in. The drums are just pulverizing. Pummeling everything in sight, with a maniacal approach in its delivery. Blast-beats dominate the entirety of the record, with some tracks being more akin to old-school death metal drumming and other varying in intensity. It is worth noting that some tracks have some very weird time signatures. Not that they are playing in 21/32 but there are segments of some tracks that give the resemblance of being in a straight tempo, but they actually aren't. Like some pauses that you know they should be there, but they aren't, playing with your notion of music and confusing you even more. Additional sidenote for the guest appearance of Chris Reifert in the track 'Burning In Damnation Fires'. His voice adds yet another level of insanity to this song in particular, with what I consider his most inhuman performance on a record thus far.

Musically, it is an absolute obliteration that gives way to magnificence. Lyrically, it is wonderful, blasphemous and provocative. Perhaps the most brutal record ever conceived and the crowning achievement not only of Teitanblood's career, but of war metal as a whole. What once was another subgenre that had very little to offer and was looked at with derision has been polished and perfected, placed in a throne of its own. How the fuck did Teitanblood manage to create this beast is something that I will never know. But I do know that this is unbeatable. No other release, be it by this band or another in the same category, will ever achieve the all-consuming hell created here. It is very difficult to pierce through the music at first (and it was intended to be) but with every repeated listen more and more is revealed. So, if you desire to subject yourself to the all-devouring magnificence that is Death, you will not regret it.