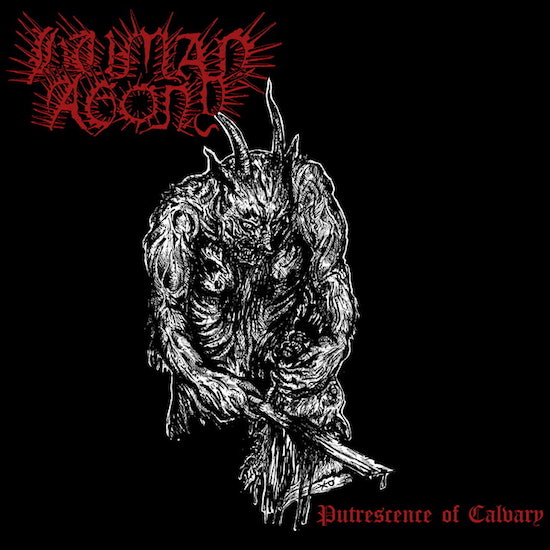 Due out for release November 29th 2019 through Invictus Productions and Final Agony Records, Human Agony bring an arsenal of riffs and thunderous drums to raise carnage with their sacrilegious, Putrescence of Calvary. This unit demolishes both weak and those boasting to be strong with an uncompromising rage. immediately you will notice the Revenge, Blasphemy, Conqueror and Death Worship markings all over the body of this primal force but not to fooled, Human Agony possess a dimness natural to their makeup. I was pleased by their 2018 effort Goring Christ, what a blast that record was though I (thought it could be better); filled with hate, dispelling misery and turmoil, relentless in its destructive ways, just a well wrapped package of vilification.

Now here in 2019 as the year comes to a close, Putrescence of Calvary sits awaiting the order of affliction; comprised of new blasphemies, and 'Eviscerated for Ritual' which was featured on their Methgoat and Striations splits respectively, this flesh storm is the band awakened to the true potential of their power. If you like the wails of disaster then these are the tunes for you. Calibrated with the admiration for the craft, this effort amputated with old and newly developed abominations fetches about the famine embedded into their style of playing. Digging beyond the flesh, no man is safe from attacks the likes of 'Corpse Wound of Antichrist', 'Unwilling Blood' and 'Doctrine of Cruelty' all intertwined to deliver a unified overpowering capsule of terror. By now the Canadian war metal arena is overwhelmingly polluted and the looks of it being cleansed are nonexistent. With blasphemy being the primary contaminant spawning many un-treatable symptoms, it's no wonder a band the likes of Human Agony would emerge.

It really does not matter how much I've had of bestial black death metal to consume, I can't get enough, there's always a band that's gnarlier the last, it's a deep hole that seems to have no bottom this war metal thing with each new depth darker than the prior. Putrescence of Calvary is just insane, sounds like an army of lunatics charging your way. Opening the ceremony with an Introduction of tortured screams, they emphasize and set you up for the agony to follow with blasting barbaric fury underlined by a technicality and rhythm intrinsic to a Revenge or Conqueror. Their influences are represented with pride on Putrescence of Calvary, it's hard to not hear the inspired vocals of a J Reed (Revenge) or the apocalyptic sounds of a Death Worship's wrecking strings and drum combination. As stated before 1 of the tracks on Putrescence of Calvary is an old recording but serves as worthy support for the new installments which by the way echo the tongue of zero-tolerance war metal butchery. Get this record by Human Agony, Putrescence of Calvary is skin peeling, flesh ripping inhumanity.