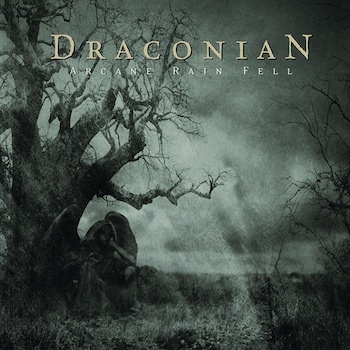 What an atmosphere, deranged lunacy to the morbid settings that come arie when listening to this release. You'll get a bulk of an hour's worth of darkness seemingly to be visible. As a usual mild tempo of even slower guitars, musically that peaks as its' aura is deeply tranquil, yet quite alluding to death's door. A mixture not only of just heavy duty chunks of guitar work, it's filled with other braziningly moderate musical concoctions of piano work alongside spoken word overtures that don't stagnate, they keep the vibe at their unique genre. A very well produced release where everything just is in the right place, the way a "gothic doom" sound that blissfully is great to "chill" to.

The female vocals add a little variety to just heavy throat, plus the lyrics fit deeply well into this sorrowful chain of music that needs more followers. Not enough people know about this band and their blitz with frayed ends of insanity regarding the tonality of their releases. You get it all here, except the fact that their focus is not aggression, it's an open door to the gates of eternity. Such a well played release with unique sounds coming from all over the recording. The guitars focus mainly on such moderate blends of chords and melodies which are wholly original, never copping out always seeming to be so "them."

A sure band that invests in sounds that are so mild, it makes the mind seem at ease where the darkness is vivid with lost sanity in the lyrical compositions. Not only do they invest in just a moderate form of doom, but also take pride and write about such morbidity with creativity mixed with the music that devours the souls that are lifted into eternity. I only have this one and their 2011 release, but both are exceptionally well composed with death as their venture into existence gets spewed out of your speakers hearing only that utter words of blatant intensity. There is so much to this piece of work that holds true to their own sound, missing nothing, hearing everything that is death-like.

An album that requires no expectations of anything but just their own unique metaphysics in regarding to their artistic sense of demonic love of true doom and a presence of otherworldly encounters of such divine intervention. You get it all here, the spoken words, the occur of hoarse vocal outputs, female voice present in moderation, tempos that are so desolate they seem to touch the soul with tranquillity and music that is baffling to the listener because of it's sole presence of just emotion, driven to the essence of doom with destruction rampant. The release definitely posed capitalizing on originality in songwriting occurs.

If you're into some really mellow metal thats' premonition is that of darkness when listening to, Arcane Rain Fell holds the vivid truth in their essence living up to the stock of sheer morbidity with music that's spellbinding in metal that is great to listen to when you want a break from something that is truly an epic hour of 8 tracks flowing through the forests and drastic pillars of death lurking within their own essence of it all on here. I'd say from all I've heard from this band, this one is their best one. But on all to which they've released in album form, they dominate with such an atmospheric deathly doom of dreadery. Own it, you won't regret it at all!

Dear sons of sadness and despair,

The time has come to embrace the new masterpiece by Draconian, the once promising Swedish doomsters that with their sophomore release, Arcane Rain Fell, have made clear that they are a contending force. If you thought Where Lovers Mourn was an impressive debut, you will surely be brought to tears with their latest offering. The compositions are darker, the sound is thicker and the emotions portrayed in every single obituary are as sinister yet heartfelt as they can get.

This time the music is much slower than in the debut. It’s not as accessible, which is an appreciative quality. After several listens, the album drags you into an emotive and sad hypnotic atmosphere that their debut did not reach. I’ve not had such an experience since the early Anathema days.

In Arcane… you will find some female vocals, though not as many as in their debut. The vocals are as death metal as they can get for this release, a signifying that Draconian doesn’t have any plans of whimping out in the near future.

All the tracks have unique merits to deliver success. The track “Daylight Dies” is excellent for its catchy chorus. “The Abborrent Rays” succeeds with its Katatonia Brave Murder Day feel. Dreamy yet gloomy, “The Everlasting Scar” is what doom metal is really about. The approach Draconian took with slowing down the tunes really paid off. Once you hear all the songs you will know exactly what I am talking about. There is no waste here.

Fans of early-mid nineties doom metal will find in Arcane Rain Fell a true jewel. Bands like old Anathema, Celestial Season, My Dying Bride and the likes should be proud of this bastard son. Fans who are not very familiar with doom metal should give the newest release from these Scandinavians a try. But I warn you: music this thick, heavy and dense is not very easy to swallow at first. Give it several listens and with the proper treatment, you will reach a good level of hypnosis. Listen and fly away, because this one is definitely a highlight for the year.