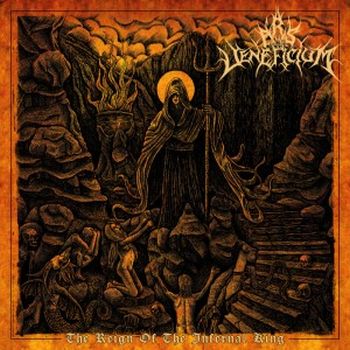 Type: Full-Length
Release Date: September 26th, 2016
Label: Immortal Frost Productions
Genre: Black
1 Intro
2 Damnation Of The Soul
3 Fallen To The Realm
4 Angel Of Angels
5 Extinguished Are The Candles Of Holiness
6 Reign In Darkness
7 As Flames Spread Into Chaos
8 Thy Will, My Hands
9 Bringer Of Light
MetalBite on YouTube

I admit that I eagerly await the announced full-length from the most competent Belgian devils Slaughter Messiah. Yet it still takes three months until its release and sometimes I enjoy a placebo as well. The Reign of the Infernal King is maybe even more than just an actually ineffective substitute drug. The picture of bass player “Lava” seems to be the optical implementation of the music - and this dude has a mighty, powerful and unfriendly aura.

The band does not think that it is most important to give full speed ahead, but this is not the only tempo the dudes know. “Extinguished are the Candles of Holiness” shows the complete portfolio: thundering and rapid eruptions as well as an almost lugubrious guitar solo. Alas, the track also shows that the album is not free from incoherent sections. The entire first minute offers nothing but a stupid dialog. Pretty long 60 seconds that kill the flow of the album, I can tell you. Honestly speaking, I thought I had bought a black metal record and no audio book or something like that. But okay, this kind of “atmosphere-slayer” remains an exception. The beginning of “As Flames Spread into Chaos” makes up for this. A violent riff, performed in memory of the fast songs of Beherit’s “Engram” album, tears apart the silence and for a short time it seems as if all hell breaks loose. However, even this song does not focus on pure violence exclusively. After having unleashed a proper inferno, it falls victim to a dragging mid-part. Not bad, but a waste of resources.

Yes, it’s no new finding, but albums mainly depend on the quality of the song-writing. Ars Veneficium avoid obvious mistakes, their technical skills do not lay themselves open to attack and the band has no intention to hurt even the smallest Satanic law. Their compositions praise the long-term tenant of hell, the loud voiced vocals add the genre-typical rawness and the hard-hitting guitars have the power it needs to form a steadfast black metal sound. The competently tortured drums do not stand in the background and even the bass of our old friend Lava is audible from time to time. The combination of all these elements mostly leads to good, but not outstanding songs. Of course, exceptions confirm the rule. “Damnation of the Soul” meets the international standards of the devastating genre due to its density, its relentlessness and its homicidal beauty, but all in all the compositional skills leave room for improvement. On the other hand, the five-piece finds the balance between complexity and primitiveness and the flickering yet very harsh guitars of “Fallen to the Realm” form another track that pays tribute to Beherit’s aforementioned classic. By the way, this track also shines with a gloomy guitar line (inter alia at 1:25) that seems to be inspired by the fantastic leads of Enthroned’s “Bloodline”.

Some meditative yet very heavy riffs, mainly used to open the songs, complete the picture. The artists under the banner of Ars Veneficium are no clowns, the album has an authentic touch and only people with an underdeveloped sense of harshness will ignore this output. Maybe I just set the bar too high, because Belgians have proved that they can produce gigantically strong black metal. “Prophecies of Pagan Fire”, “Fatherland” or “Morbis Re-Incantations”, do I need to say more? Compared with these masterpieces, The Reign of the Infernal King sees only the taillights of these speedsters. Anyway, if you need a further dose of black metal from Flanders/Wallonia, feel free to check out the here reviewed release.