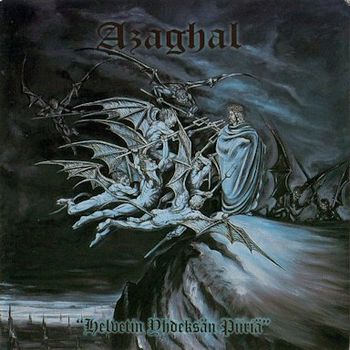 Since roughly two decades, Azaghal are torturing successfully their surroundings. Their understanding of black metal has always brought nasty compositions to light. The Nine Circles of Hell, to use the English translation, houses more or less logically nine songs that reflect the misanthropic attitude of the Finnish brigade very well. Yet it cannot be overlooked that the here presented material remains on a rather average level. The production is one of the reasons why this album fails to enthuse me. Sharp but simultaneously thin guitars meet rattling drums and the vocals, equipped with an overdose of reverb, are very dominant. Vice versa, the bass guitar is notable for its absence. I am not speaking of a totally bad sound, yet there exist thousands of albums with a better production.

Despite a surprisingly high number of fairly unnecessary calm intermezzos, the record does not lack fury and anger. Azaghal catapult their raw hymns into the audience without mincing their words. We are entering a closed black metal cosmos where Azaghal operate. External influences are not identifiable. Pure blackness is mostly a good thing, but Azaghal have forgotten to write some memorable, concise riffs. Or to express it more generally, outstanding characteristics are missing more or less completely. One needs patience to find some parts that have the quality to pull the album on a higher level. The slowly growing beginning of "Kohti uuden aikakauden alkua" has the potential to give the album a certain kick, but compared with their later feats (Omega or Nemesis), the here reviewed work tastes vapid. Even the aforementioned track with its promising beginning lacks intensity and inter alia due to the missing compactness its impact is rather small. The furious ending indicates the strengths of the group, but the whole middle section of "Kohti uuden aikakauden alkua" appears pretty harmless.

What remains is a pretty good, partly blast beats driven shocker called "Hän joka on tuleval". To be honest, the song lasts a minute too long. Nevertheless, it mixes brutality and insanity in a fierce way. But too many sections are going nowhere. The band makes some noise that does not lack structure, but compositional excellence is missing. The result is that all songs somehow form a lump of black metal, an attack of half an hour which seems to bow down to the dogma "full dedication is more important than well-designed tracks". On the one hand, this mirrors a good mindset, on the other hand one might ask whether the Northern Europeans have set the right priorities. Despite the fact that I really like this band in general, I tend to the latter.