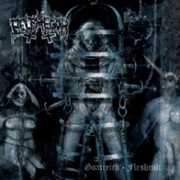 Blood starts to run down the battlefield as the first Christian is battered to death by the ten-ton metal war hammer known as Belphegor. For those of you who don’t know, Belphegor is an army that was created in Austria more than a decade ago with only one goal in mind: to put an end to Christianity by creating the most destructive music in existence.

The new war, Goatreich – Fleshcult, is as we have come to expect from the army. You have fast and deadly songs like “Swarm of Rats,” “The Cruzifixus - Anus Deil,” “Bleeding Salvation,” “Fornicationium Et Immundus Diabolus,” and some other secret weapons. On the other hand, “Sepulture of Hypocrisy” and “Kings Shall Be Kings” are two unexpected new wartime strategies that Belphegor has never employed before. Here the band uses slow shots, effective tools of torture that are sure to surprise the enemy with their creeping yet punishing power.

The man behind this war is commander-in-chief Alex Krull, who made sure that every machine gun, sword and grenade launcher worked perfectly in order to see Christian guts spilled everywhere. His work was so meticulous that the army has never been so deadly.

War is on its way now and that’s for sure. The Goatreich – Fleshcult mission is a true success. I can already see the troops returning in glory after the massacre they will generate with this release.