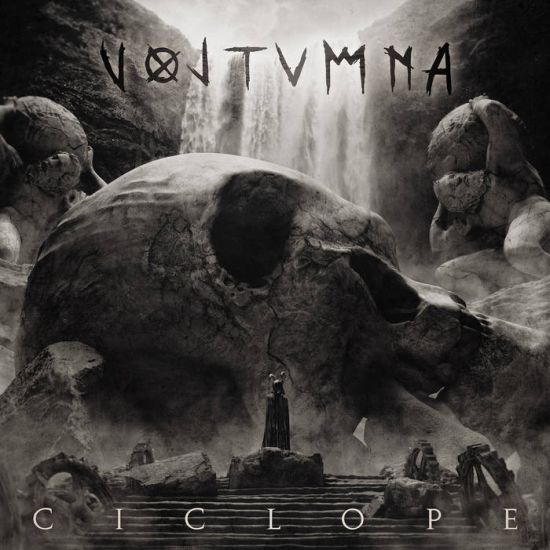 One of 2019's finest releases almost went undetected. Voltumna's fourth full length record Ciclope. Knowing nothing about the band I let it be and dived face first into the material and splat!, the sound when greeted by resilient fabric in the form of music. They're some ideas the band appears to be playing with, correction, there are many ideas Voltumna seem to be toying with; hence being the album's minimal downfall and its overwhelming success at the same time. It's probably the most enjoyable, yet inconsistent melodic black/death metal album of 2019 that I've heard. So, for those of you not prepared to receive a mixed dish of inconsistencies and incoherence, then you may be 'Entering the Wrong Circle' here on Ciclope.

Firstly, the problems, the music is all over the place. Now that could have been a rewarding aspect if there had been a higher level of cohesion to bring all the material together, instead what you get is different formats of music scattered all over the path. Second problem, the vocals could have been a lot better. They don't sound very intimidating, or convincing for that fact and being a black/death metal album, I would have preferred a more serious of a death metal patterned vocal and pitch used, instead of what exists on Ciclope. As far as the undesirables are concerned that's about all for me there's nothing else that appeared to be out of place.

While the music may appear disconnected one cannot dismiss the fact that its excellently performed. The riffs, the catchy drum fills and motions, the multiple styles utilized to represent what the band is all about are of notable character. 'Collapsed Island' is more aching to the 2nd wave format of the genre with a few non-conventional inclusions, but as you progress down the track-list, the album mimics that of an avant-garde one. The compositions rather than sticking to one set of rules goes to war with the projected path through the use of East Indian, progressive, brutal death metal, deathcore, slam and technical elements. Though not ideally incorporated, the playing of these individuals is remarkable, and under other conditions I probably would have passed Ciclope off as a far better album than it currently is. As far as defining 'other conditions' you could say had Voltumna not been a black/death metal band instead an avant-garde metal one.

Some songs are significantly better than others, 'The Megalithic Circle', 'Cosmos' and 'The Double Spiral' hint at how the music should have been arranged. Far better organized and cohesive than other tracks, these entries have a flow to them that interrupts the stagnation of randomized instrumentation with 'Cosmic' being the best example of how to effectively combine elements of melodic black/death metal with keyboard synth and a fantastic power metal guitar solo. While not as ambitious as 'La Furia Dei Ciclopi' the music on these and on 'Cosmos' amalgamate better than on other installments. Hence, instead of working against each other, the instrumentation works in the best interest of Ciclope as a collective.

There are some songs that could have amounted to more such as on 'Divine Bloodline' and 'Hybris' but fell below my expectations due to some questionable musical decisions. Once you hear those songs you should understand. Still worth a high rating but could have been a far better record altogether.