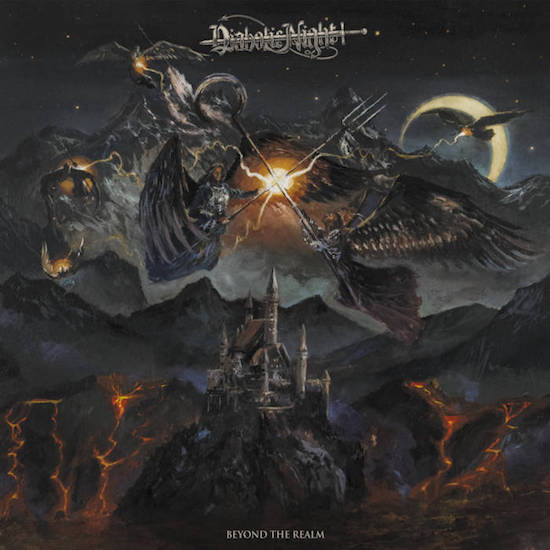 For the very sensitive ears of my German compatriots, it might sound like a nationalistic slogan, but sometimes it’s just true and – fortunately! – free from any form of politics: tradition beats any trend. Yes, well written pieces that know their ancestors, their roots and their bloodline will always win against trendy, experimental and further sounds that understand innovation as an end in itself. So, raise the curtain for Diabolic Night, a German duo that brings back the spirit of the past, not only in view of their old-school-as-f**k artwork. Their first full-length appears as the melting pot of Teutonic metal culture. Here you find elements of

- Iron Angel somewhere between “Hellish Crossfire” and “Winds of War”
- Running Wild before Rolf began to play the Caribbean clown
- Nuances of Blind Guardian before they fell victim to their own operas
- the melodic harshness of early Paradox and, finally,
- the spirit of newer (retro) acts, for example Quintessenz.

The aforementioned bands have one thing in common and that’s no coincidence. They did (or do) not play pure thrash, pure this or pure that. For instance, remember the black atmosphere of “Gates to Purgatory” that met rather time-honored structures. Heavy Steeler, the head of Diabolic Night, is also a great cocktail mixer behind the counter of a decrepit den of thieves where old school metal rules the whole night long. His music is sometimes dark (“Crescent Moon Rise”), sometimes driven by harmonic leads (the title track) and sometimes the he and his companion take the shortest, straightest and fastest way (“Infernal Power”, “Sovereign of Doom”). Their songs have compact designs and – it does not come as a big surprise in view of their traditionalist approach – more or less conventional patterns. Perhaps we have to respect people who say that this kind of music does not guarantee the highest level of excitement, but don’t jump to conclusions. The ending of “Odyssey”, for example, is far away from being predictable. Maybe the hoarse vocals, which are supported by massive reverb, are pretty average, but all in all, Diabolic Night’s songs do not lack individuality.

Generally speaking, the smooth flow of the songs does not hurt their heaviness. Perhaps every now and then the solos are too opulent, but everything else is well balanced and the only thing that the band does not offer is boredom. The material scores with its lively vibes, the usual atmospheric gimmicks like funeral bells are well integrated and if the band is able to improve its (already well-developed) song-writing skills, they will be a real force to be reckoned with, at least in the German scene. They are not there yet, because their less speedy tracks do not fully achieve the class of their almost pure speed metal eruptions. But maybe that’s just a question of time. By contrast, the production is already on a top level. Beyond the Realm presents a warm, old-fashioned mix without repeating the recording mistakes of some old heroes. So, I hope you will enjoy the compositions of this album – and maybe it will happen that you think of Death’s “Evil Dead”, because the intro of “In Retribution” lies in close proximity to the beginning of the classic of Chuck (R.I.P.). Well, a few non-Teutonic details are allowed, if I am not mistaken. But don’t dare to violate the laws of tradition, even if you call yourself Chairthrower!