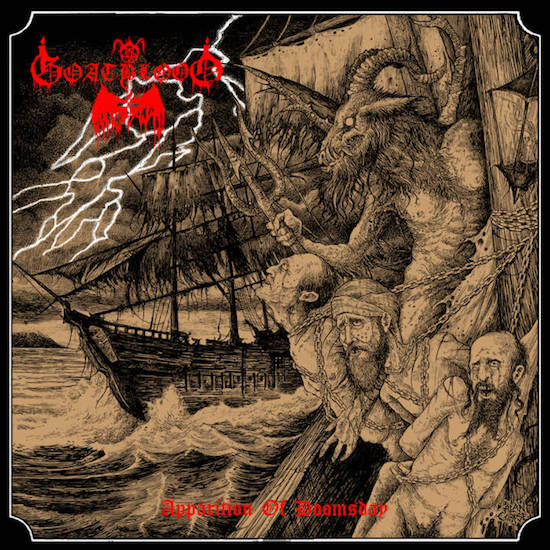 Heavily influenced by Profanatica and Archgoat; Goatblood, propelled by the German duo of Reverend Slayer and Satanic Death Vulva, release their third full length bestial attack under the guide of Dunkelheit Produktionen. They've been around for a while now, since 2013 to be exact and I remember hearing their second album Veneration of Armageddon in 2016 that while good, was to an extent overlooked by a scene already swamped in savage excrementia from both pioneering and freshly cut bands.

If you're more than just familiar with the genre this kind of thing can get tiring, but for someone tip-toeing the border between extreme and commercial metal, its fair enough to understand they would be attracted regardless of how unchanging the methodology may be. The music here is as I would expect, primal drumming, great guttural vocals and riffs to fill the plate of the average black/death listener. Those are all great to have in the arsenal, but 45 minutes is much too long for something this abrasive and structurally unmodified. 30 minutes would have been ideal for Apparition of Doomsday given there's not much occurring within the department of variety. I take because it’s been 3 years since the last full-length record, Goatblood saw it necessary to take this step in their catalog, and tack on 15 more minutes of material as a bonus perhaps.

From 'Goat Order' through 'Flood of Roaches' you'll get bestial, dark and untamed recordings put together proficiently; the rage velocity is high, and the songs make compelling impact, enough to produce headbanging for quite a while. The variation here isn't much but there is by way of doom metal transitions and sudden mid-tempo blasting. The first 9 tracks are the best of the total album, but the latter songs fall a bit short in memorability, they rarely try in offering anything different as they follow the standard path of war metal basics.

However then former side of Apparition of Doomsday carried the load of the work given 'Goat Order', 'Beach of the Dead', 'Exclusion Prevails', 'Flood of Roaches' and 'Ram of Nazareth' are such killer tracks. The thing is Goatblood don't dwell too much on technical this or variety that, they could not give a fuck-less, rather they insist a continuous hostility supplementing new levels of intensity, hence I think it's here they truly make their weaponized talents known. Yes, the guitars could have been used more to encourage replayability than what is already existent, but nothing can be taken away from Goatblood as far as erecting that war metal sound we all hold dear. The samples prelude to 'Beach of the Dead', 'Flood of Roaches', 'Ram of Nazareth' and so forth add a minatory sense to the tunes, that in conjunction with the production helps the impact of the recordings on Apparitions of Doomsday.

What I perceive as excess others may take as necessity to their thirst for such material. Fair enough, but if you're serious about standing out in this already overcrowded war metal territory, you'll need to go a bit further than the archetypal approach. Nonetheless, Apparition of Doomsday is a passionate offering of foulest visions in musical form untouched and unbent by subordination.