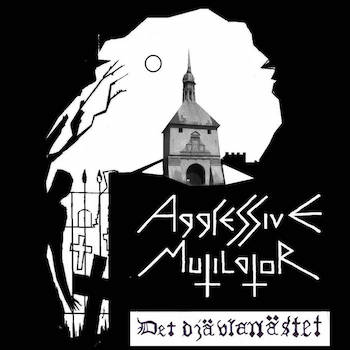 Sweden's Aggressive Mutilator plays a stripped down and brash form of 1st wave black metal sewn together with some thrash, traditional heavy metal and speed metal altogether fused with organ/keyboard samples. Their 2nd full length record, Det Djävlanästet brings a wave of menacing intensity to the sheep and shepherd. Originally released in 2018 through Mythrone Promotion on CD format, then later on cassette through Visceral Vomit Records and Sanatorio Records, this 17-minute tank of atrocity overflows without care of who is offended by whatever. The appeal here lies within its raw production, lyrical meaning and roughneck approach to the instrumentation and vocals. Det Djävlanästet is a record heavily overlooked in 2018 that you might want to visit if you're into the uglier side of music.

From the inception of 'Dead Pigs' you get the idea behind Aggressive Mutilator, their disgust expressed most violently for the greedy percentage carving away as they heartlessly exploit every resource to fill their bottomless pockets. To their contempt shown on 'Hypocrite Church' for the 'holy' establishment which has brought much death and despair to once thriving cultures around the world while preaching 'peace' and 'love'. Aggressive Mutilator conduct a sermon of eradication making their stance rather clear; backed by some funereal samples as heard on ‘Bland löss och annat fanskap’ and 'The Orb', the duo of Micael (drums bass) and Mikael (guitars, vocals) put the hypocrites to an eternal rest.

Musically, Det Djävlanästet is nothing fancy. Aggressive Mutilator's approach is ideal and drives across the effect of just how much they loathe corrupt establishments or at least that’s my interpretation. Riffs and drumming are fairly straightforward but is varied through maneuvering thrash metal, black metal and even traditional heavy metal. ‘Victim#59’ has an eerie overtone that plays into the overall theme of real horror and destruction; though its lyrics are just a few lines, it speaks loudly to whomever is listening, thereby forcing one to contemplate the current times.

I think I will have to look into Aggressive Mutilator's past material, I'm not blown away by what I heard, however, Det Djävlanästet was played convincingly enough to warrant repeated listens and an investigation into their catalog should the time be granted. Definitely a record you need to check out; it possesses enough cohesion and substance worth at least 2 listens. I'm interested in hearing what else is scheduled to come from Aggressive Mutilator.