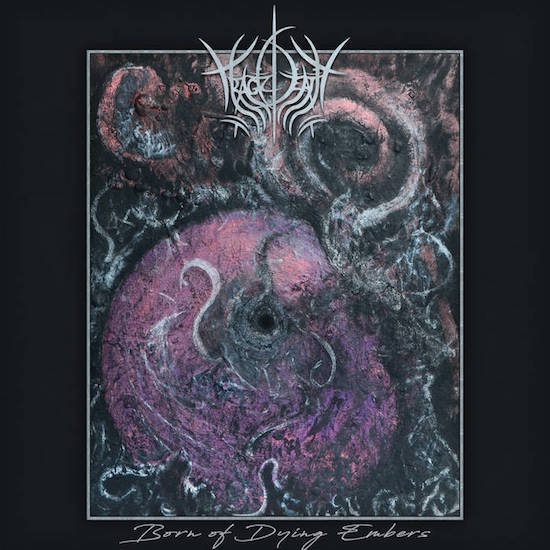 As you scurry towards the end mankind is approaching Tragic Death enable the sounds to accompany the downfall. With their EP "Born of Dying Embers", the quartet has taken major leaps into the world of black metal. As we know, this genre is crammed with bands that unfortunately are more uninspired than those looking to create something worth listening too; the quartet here are among the group that aim to craft music that is still respectful to the genre through their incorporation of other elements. Their music could be placed within the category of melodic black metal or as the band describes it, "blackened hell metal", however they incorporate enough to give their sound a uniqueness telling of their identity.

"Born of Dying Embers" is heavily guitar driven through the lengthy songs creating a contrast existing between mayhem and beauty. The band's usage of keyboards to setup the atmosphere on the opening song 'Gloaming' gives the listener/s an impression a battle of opposite forces are at the center of the ideas expressed on "Born of Dying Embers". The chaotic touch of Tragic Death's instrumentation arrives in the form of their guitar riffs conjuring an overall claustrophobic, devastated overtone; but with the addition of a synth element to carry the atmosphere. All that chaotic motion is supplied with an eerie offset signaling the emergence of some menacing offspring, fortifying the title "Born of Dying Embers". That's not all happening on this EP by Tragic Death, if your ears kept you glued to your seat, then within the time spent you should discover thrashing moments, traditional heavy metal incisions, some sections reminiscent of Teleport's Expansion, tremolo picking and Gojira-esque pick-scraping all combined to present a coherent representation of the philosophy behind "Born of Dying Embers".

If ever you have/had been looking for a succinct combination of musical influences in black metal that does not come across as being detached or coaxed, then "Born of Dying Embers" is among the breed of such releases. 'Gloaming', 'Dead Flies' and 'Apparitions' present a fascinating tale. There is much fluctuation with the momentum throughout the 30 minute journey, as one would expect given so many disciplines are utilized, but all this is acts in correspondence with the primary theme of the record. This shift in momentum is aided by the fine guitaring of front man Steven Craig Moser Jr. who also handles vocals; and as mentioned, the guitars here take the lead, so I'm not surprised its used as a suggestive queue in building a crescendo or declining from climaxing moments. That's a property of Tragic Death's EP "Born of Dying Embers", the fluency of the instruments take the lead in building the album to what it is. Joe Dunn's bass is not buried despite the loudly mixed guitars and vocals, Kyle's synth is audible through mellow and abrasive sections and Cody Stein's drumming acts as a platform of unification.

The music here is exceptional and calls for multiple listens due to being so well played. Production-wise, the mixing and mastering is ideal, I am in awe at the instances of individual clarity of multiple notes despite the synchronicity. "Born of Dying Embers" is certainly a record you need to hear if you appreciate concise and well executed musicianship.