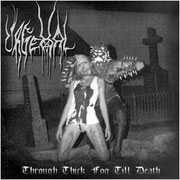 Right to brass tacks; Urgehal are ugly. Ugly, ugly people making ugly,ugly old school Norwegian Black Metal for ugly, ugly reasons. The minute you look at the cover of Through Thick Fog Til Death, a truly grim black and white photo of guitarist Enzifier looking like one of the Cenobites from Hellraiser cutting into some poor, winsome girl in a graveyard, you know this is not going to appeal to higher aesthetics of beauty. This is a good(?) thing, as beauty has no place in this collection of odes to Satan, Blasphemy and the eradication of the few billion souls who unfortunately share the planet with them.

Urgehal take the driving tempo of Carpathian Forest and mix it with the chill atmosphere of A Blaze in the Northern Sky-era Darkthrone for a truly demented onslaught. Originally including a keyboardist in the lineup, Urgehal eliminated the keyboard and are no worse off for it. Indeed, after listening to Through Thick Fog Til Death I don’t see how keyboards could do anything but detract from the overall atmosphere of the music. Drummer Uruz (of Crest of Darkness) and bassist Sregroth lay down an incessant blackened thrash gallop that the raging guitars both trample on top of and alongside. Frontman Trondr delivers songs of hate and sacrilege in graveled, harsh rasps that bear no indication of the falsetto shrieks that have become more and more commonplace in Black Metal today. This alone makes me as happy as such music is capable of. Hearing someone keening like they’re pulling straight down on their nuts with every word does not make me think “Necro”.

Tracks such as “Mirror Satan”, “Mankind Murder” and “Supreme Blasphemy” give testimony to the pure hate that drives the band. The 15 track album also includes four live songs which give brutal examples of the band’s live endeavors to be just as punishing as their recordings, standouts there being “Flames of the Black Candles” and “The Eternal Eclipse” which is an incredibly nasty piece that is worth the purchase price itself.

Through Thick Fog Til Death is bound to be one of those just under the radar albums that will only gain the credit and hails it deserves on the underground level. Somehow I get the impression that this is right where Urgehal wants it. Fantastic album.