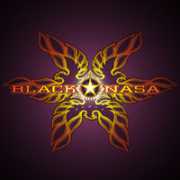 Black Nasa’s Deuce provides a decent lesson in quality over quantity. Spearheaded by Atomic Bitchwax bassist Chris Kosnik, Black Nasa put out 10 tracks of acid-tinged rock clocking in at a mere 34 minutes long. Throughout Deuce there are many tips of the hat to the likes of Pink Floyd, KISS and Deep Purple. Despite farming in such over-tilled soil, the band maintains a freshness of sound that keeps this album well enough away from the “Been there, done that” file.

Originality might not be a huge priority on these guys’ list, but many a potentially good rock album has been wrecked by trying to be the next Hawkwind instead of just delivering a good, straight ahead album like these guys do. The songs average about 3.5 minutes long, leaving the album overall pretty lean and tight. My only exceptions to this would be the three instrumental pieces, which seemed to have a tendency towards ambling away in awkward directions, leaving a decent ending difficult to get to, let alone appreciate. Kosnik and crew still prove to be adept musicians with a keen sense of groove, making the majority of the album a likable listen. The exception to this would be their entry for the “We Didn’t Really Need to Do This” Award 2004 with their off the cuff rendition of Run DMC’s “You Be Illin’” at the very end of the album. This is a minute and three seconds that need not ever exist. Remember guys, death is easy, comedy is hard.