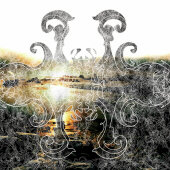 Another day, another promising CD from Finland. This time it's Callisto of Turku, who sound remarkably like Opeth of Sweden crossed with Neurosis of San Francisco. That isn't criticism. This sounds like Opeth's Blackwater Park crossed with Neurosis' The Eye of Every Storm. As a matter of fact, this is a very good debut album, but that is how this band sounds.

Callisto use a relaxed playing technique that clearly derives from stoner rock to create subtle song structures with an experimental doom-death atmosphere, similar to Neurosis’ Eye… with edgier guitars. There's a minimal amount of distortion, a few token samples for atmosphere and absolutely no keyboards, but the two albums are structurally similar. If you can imagine crossing the structure of Neurosis with the scales of Opeth, then picture that played with Agalloch's cadence and Morgion’s pitch, you can probably guess how this album sounds without hearing it.

Therein lies this album's strength; Callisto create powerful atmospheres using only traditional rock instruments, without falling into the trap of reliance on keyboards and static. That's quite a promising accomplishment, since it takes precocious musical talent for genre newcomers to write interesting songs with the absolute minimum instrumentation. On the other hand, its weakness is the same criticism people make of Agalloch and Opeth lately: there's often little variation between songs, particularly on the first half of this CD. As a result, each song's component parts could fit almost anywhere. Callisto's transitions are excellent, so their segments never feel misplaced or awkward, but this album sometimes sounds like a protracted doom-death jam session.

Callisto deserve remarkable praise for introducing themselves with a powerful, well-crafted album. While this falls short of being an “album of the year” contender, it's impressive and promising when any band makes an experimental doom-death album without the usual clichés and pitfalls. Unless you hate both experimental metal and doom-death metal, you will find something to like in True Nature Unfolds.