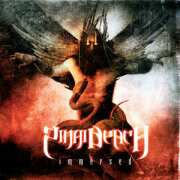 What would happen if Slipknot, Pantera, and Danzig got into a three-car pileup on the way to a Prong concert? The answer is Sinai Beach, an energetic American metal band with great musical ideas and monumentally atrocious vocals.

Sinai Beach are good musicians, aggressive and energetic without very much annoying metalcore, but it’s hard to find much added praise for them when their vocals literally ruin everything. My description of their vocals is no compliment: They start out with standard growling, which is acceptable enough, albeit somewhat trite. Then, about 40 seconds into every song, the mood is absolutely ruined by this tone-deaf Glenn Danzig impersonator, who sounds like he just got kicked out of a backyard Samhain tribute outfit. Not even the last Danzig album had such monotonous vocals. He can’t hold a God damn note!

Hold on, perhaps I’m being too harsh. Let me skip a few tracks back. No, there he goes again. I thought I was generalizing a bit much, but after a few listens, I realize that every song is the same unfortunate story. They’re all energetic American metal, they’re all thrash mixed with a later period Pantera influence, they all proudly feature pounding and aggressive introductions -- and then that third-rate Danzig wannabe opens his mouth to wreck everything. This has the same effect as your roommate walking in while you’re undressing your girlfriend: Not only does it spoil the mood, but you’ll be pissed off and bitter. Repeat that feeling ten times, then add a pointless introduction. Now you know what listening to Sinai Beach feels like: Coitus interruptus.

I suppose that I could write more about the music, but I’ve already captured both the album’s feeling and it’s most memorably tragic defect. Without the vocals, fans of such diverse acts as Shadows Fall, Slipknot, and Pantera would all appreciate this album. With them, you’ll only appreciate this in one minute long segments. The music is decent, and sometimes outstanding, but here’s the bottom line for these poor bastards: Fire your fucking vocalist.