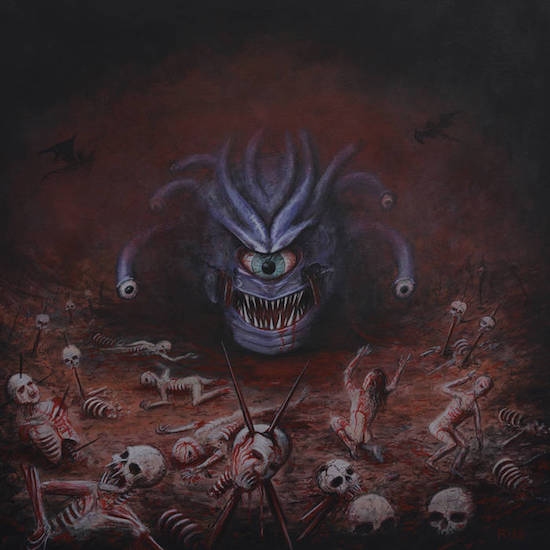 Newcomers Xantam arrive with a few tricks up their sleeves, taking the black/death metal sub-genre and combining it with a flurry of rhythmic/melodic overtones (among other things) helping to create a unique sound and experience. The solo project debut, Altered States, is a short and memorable effort that is equipped with lifting melodic patterns that are almost epic at times such as on 'Pseudogods' and the self-titled 'Altered States'. Merely 2 tracks of metal with the addition of an intro being 'Starlit Oblivion' and an outro, 'Devolution', both marinating the effect of the keyboard synth landscapes that add a sense of majesty and enchantment working together. Altered States is roughly black/death metal that has sort of an ongoing affair with Scandinavian black metal, dungeon synth and lightweight melodic death metal. I say light weight because it often cracks the seal of galloping drums, persistent growling and tremolo picking to show its colors but barely sticks around long enough to take a few breaths before being buried by the more dominant elements.

The songs in between play like expansions to the synth that once heard, continue to buzz-around your ears, yet amidst the magical, and soothing presence of those keys lies a warlike attitude thanks to those loud death metal growls, fast tempos and battle-mech type drumming that is fast and tight plus has a similar double bass tone and technique to that heard on Immortal's "Battles in the North". I don't know if they were programmed but if they were not hats off to Xantam the Beholder. This individual can play, and I hope the next record to materialize from the solo project continues along this path. Usually with an EP a band is most likely searching for their sound or beginning to build their foundation, but here on Altered States, Xantam seems to have it figured out, that's impressive particularly given the fact so many diverse sounds contributed to its crafting. Altered States exhibits a profound type of musicianship that echoes a friendship between chaos, melody and stability. Nothing needs to be changed, its present state need not be altered, if he can pull out 38 minutes of this for a debut full-length I would be more than satisfied.