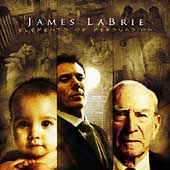 Strange thing to say of a “metal” band, but Dream Theater always seemed most tolerable when they were doing their more ballad-like material. Here with his solo album, Elements of Persuasion, James LaBrie is essentially taking a more direct approach than the last DT album I heard (Scenes from a Memory) and in the process shows why the pussywhipped side of his day job seems to have the run of things.

With no further beating around the bush, LaBrie’s vocals are, by and large, wrong. Opener “Crucify” perfectly illustrates the point at hand. With its heavy guitars dealing out thick speedy metal verses and a natty pre-chorus breakdown you’re getting a surprisingly fierce track that sounds modern and relatively aggressive; largely the story of the album. There are some duff moments on the album musically, for instance “Drained” contains a particularly comical riff and “Invisible” is just plain tedious. In the main these problems aren’t all too common.

LaBrie’s over the top squeals, however, are a pain in the ass. When he keeps his tone at a moderate level it’s tolerable despite being a small fit for the big music. As he slowly creeps into “balls-in-a-vice” territory it gets uncomfortable and I had to keep checking that my own manhood hadn’t dropped off in sympathy.

A personal highlight of the album, “Slightly out of Reach,” shows the best side of his abilities; the sappy balladry ensures he keeps to the lower tones, and in tandem with the keyboard washes makes the track sound somewhat heartfelt. Of course there’s an overdone guitar solo that gets bothersome after a short while - residue from the day job? Perhaps.

In all this is actually more an enjoyable album than I expected it to be. Some slightly awkward moments musically and a fair amount of shocking moments vocally only take this down a few notches. Overall a pleasant listen that will likely grow on you like a nasty fungal infection.