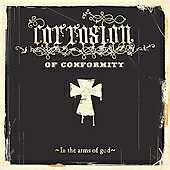 Experience counts in rock and roll, just like everywhere else. Corrosion of Conformity’s latest offering, In the Arms of God, is proof positive. The group’s first studio recording in five years and their seventh since Eye For An Eye in 1984 (what were you doing in 1984?) speaks volumes to the band’s long years of heartache and toil under the lights touring with rock heavies like Metallica, Slayer, Anthrax, Clutch, and this summer, the mighty Motorhead. It seems that 21 years of paying dues has shaped COC into master artisans. In the Arms of God is easily their finest work to date. Says guitarist/vocalist Pepper Keenan, “We really got back to our roots with this one, listening to old records that we all grew up on and headbanging at Woody's farmhouse…" Indeed.

This return to heavy rock’s roots is evident from the fist seconds of the opening track “Stone Breaker.” Smoldering blues undertones and unbelievably fat guitar riffs evoke the spirits of early Sabbath and southern rockers like the infallible Mountain. By the time “Stone Breaker” is finished I could swear I detected the scorched dust smell of an overheated tube-amp hanging heavy in the room. On first listen I’m immediately reminded of COC’s collaboration with guitar slinger Warren Haynes on their 2000 release America’s Volume Dealer. Though the group swears that In the Arms of God is NOT specifically a nostalgic record, a fond remembrance of the old days echoes throughout. What the album IS — a big, nasty, loud rock record: lyrically intelligent, stylistically daring, sometimes politically biting, technically flawless, and fucking HEAVY from start to finish — cannot be denied.

One remarkable note: I turned the volume knob all the way up half way through the first song, and with each subsequent track wished I could push it one notch louder. This record gets better the longer and more often you listen. The 7-minute epic title track plays out like a chronicle of where metal began and shows just how much homework these guys have done. It’s pure classic metal with a contemporary acerbic wit, modern production values, and a real understanding of what it takes to rock your face off. Roots-thrash battle cry “Infinite War” calls back to the early days of the East-Coast hardcore scene while delivering a blistering dose of social commentary. This record exudes maturity, skill, craftsmanship and attention to detail.

While there are some lyrical and stylistic similarities with COC’s previous material, In the Arms of God has little in common with the band’s earlier catalog, excepting a few tracks off of their riffy, groove laden 2000 release America’s Volume Dealer. Some say that’s a good thing. COC has been accused of wandering aimlessly from style to style, without really exploring one area thoroughly—from hardcore to thrash metal to riff-rock to straight up Sabbath worship. It’s true COC has managed to escape category for quite some time, but again, perhaps that’s for the best. They seem to have taken their own path, and have finally arrived at a pinnacle. Wherever In the Arms of God belongs, it has the stoner metal community in a frenzy…well as frenzied as we get. And yes, I liked America’s Volume Dealer, leave me alone.

What it all shakes down to is this: Corrosion of Conformity is a group of serious musical professionals. Though their previous albums have met lukewarm critical acclaim this group has been boiling under the skin of the mainstream metal scene ever since there was a metal scene. This album stands apart thanks to brilliant songwriting, sweat, the production genius of John Custer (Probot’s self-titled and Sabbath Tribute Nativity in Black), unlikely guest drummer Stanton Moore of the progressive jazz/funk group Galactic, and the countless acts that COC has collaborated and toured with throughout their long and rowdy career. My advice, find the biggest, most powerful stereo you can get your hands on, Stack the speakers in a towering altar, and play In the Arms of God at top volume. Then, to paraphrase the late Hunter Thompson, you will know what it’s like to hear men play rock and roll.