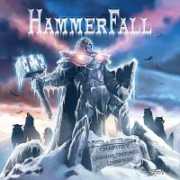 With all of the Nu-Metal, extreme metal and every other metal out there, it is great to hear metal that is not complicated or watered down. Every now and then, simple straight ahead metal is the way to go and Hammerfall is the band that can and will deliver it.

From the first guitar blast that hails another album, it is clear that this Swedish fivesome have embraced the truest metal and then made it even better than before. The fact that they have had members from a number of notable bands in their ranks (Dark Tranquillity, In Flames) show that they were destined to be the truest saviours of the missing art of straight forward
metal other than what Pantera was.

Tracks like the magnificent 'Blood Bound' to the melodic maelstrom of 'Hammer Of Justice' show that you can be incendiary in sound without trying to out do anyone. Simple and strong melodies with legend building lyrics and the impassioned love of the old school combines to make a uncomplicated yet massively metallic album. Right where the old school and new school of metal collided the crucible of the thrashing big bang... was right where Hammerfall was born.

The Metal Gods are more than simply happy with the Heavy Metal swedes. They are elated. I have a suggestion: make yourself seriously happy too and buy this album (if you already have it- play it). This is just amazingly good metal at its peak and good music in general should be shared with the metal masses.

Each genre of metal has bands whose sound never changes. Black metal has Marduk and Dark Funeral, death metal has Unleashed and Morbid Angel and even doom metal has My Dying Bride. When a band does change styles, they often risk gaining or losing a fan base. On one hand, In Flames and Soilwork have both received a great amount of criticism for their - dare I say - “evolving” sound. On the other hand, Dark Tranquillity has received great praise for the change in their music. Change is risky business.

Power metal bands are often given a bad rep because they do not change their sound. Case-in-point, Hammerfall has always remained true to their sound and have become the Swedish gods of power metal. From the band’s first recording, Glory to the Brave, Hammerfall has successfully made power metal masterpieces with each of their releases and have gained a new force of fans worldwide.

Hammerfall’s latest effort, Chapter V: Unbent, Unbowed, Unbroken, from beginning to end, is another link in the power metal chain. Lead guitarists, Stefan Elmgren and Oscar Dronjak pick up right where they left off on the band’s previous release, Crimson Thunder. The two create an unstoppable, veritable, riff machine going back and forth – not only with their leads and rhythms – but with their backing vocals, also. Lead vocalist, Joacim Cans, once again delivers a full-on assault to the listeners’ ears, displaying his soaring voice and super-sonic and subsonic vocal harmonies. Drummer, Anders Johansson, delivers a classic, power performance behind his mountainous kit, which as some may know, is set atop four bass drums.

With producer Charlie Bauerfeind behind the controls, the sound of every instrument fits the power metal criteria. Otherwise, on a few songs such as, “Never, Ever,” the guitar parts seem too extended, which in turn leaves the listener bored. Also, for Hammerfall, there is an insufficient amount of lyrics pertaining to dragons, wizards and saving princesses.