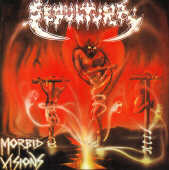 Ahh memories...Don't you love them. This is Sepultura back when it was cool to rip off bands like Morbid Angel and use english dictionaries to make up your songs. For the time and the type of studio they could afford, this release is pretty impressive for such a primitive recording. Sepultura is still a young band here but several songs shine through escpecially stand out track Troops Of Doom. All in all this is as good as a speed thrash cd made in a record store's back room could possibly get. If you are a Sepultura fan, this is a very important disc because it shows the beginning of a journey of a very young band about ready to mature beyond anyone's wildest dreams. Even though it could be considered a classic in its own right, nothing really saves it from being a relatively bad cd, but hey it's Sepultura we are talking about here...and it doesn't get much more primitive than this!

Bottom Line: Die-hard Sepultura fans make sure you have this cd in your collection!