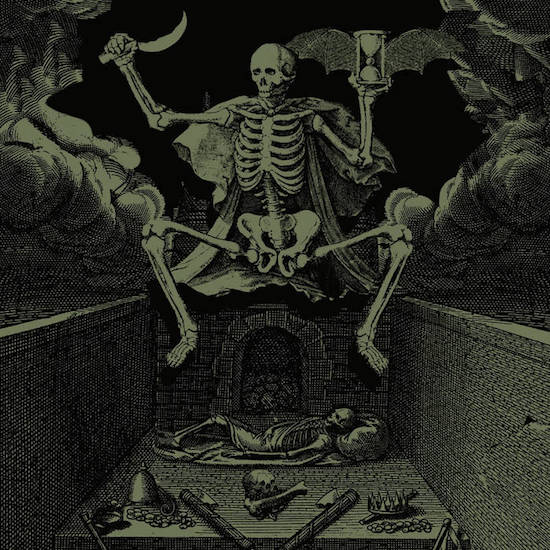 Stretching all the way to Spain, black metal occultist Qayin Regis of whose members remain unknown summon apparitions of entities from the darkest corners of Spanish mysticism. The apparatus selected to accomplish this, is one ever fitting and reliable if managed well enough, black/death metal. Doctrine is the debut under BlackSeed Productions due out the ideal time, 31st October 2019.

Only 4 entries are to be heard here, but these are of the lengthy variety, each transporting the listener to the atmosphere of fear and uncertainty Qayin Regis entertains. Though far from anything hospitable, Doctrine still does greet the listener with an immediate discomforting sense of battle between dolor and woe and that is all but one sheathing to uncover. Rest assured there is more than enough happening to sustain such lengthy output; the head-bang of thrash metal deeply embraced by the Spanish metal populace has its moments, the pumping intensity of black death metal drumming is at the center of all this but takes the slower path to give the guitars space to cultivate its own aura, in turn adding depth to an already elaborate audio range. The vocals bring a nullity encompassing all tracks, a fissure leading to a trench of terror and malediction is introduced by the vehemence of Qayin Regis, everything slips into a state of emptiness on Doctrine.

The advent of corrupting death metal by adding black metal to the mix has brought metalheads and the seasoned graduate favorable results since its materialization, with yet another quality band demonstrating the etiquette necessary to dine at the table of such. Though one could assume predictability given countless others that have followed the guide, Qayin Regis embellish their sound with melodies and rhythms recognizably different to the ears. Via 'Sincretica Obscura', the main build/the prototype of essentially everything to follow on Doctrine. Not to be mistaken for repetition, limitation and monotony as they are not the outline factors in summation of Qayin Regis' debut, as technical flare and distinctive rhythm patterns are enlisted as key components behind the drive of Doctrine.

Some resemblances to a Spectrum Mortis would take shape on 'Yee Naaldlooshii', 'Neenia Ataecina' and 'Deo Aironis' specifically in the mid-tempo regions of the band's musical assembly that spawn enraged vocal or guitaring spikes like ictuses. Qayin Regis' music here has character and identity therefore ensuring its longevity in opposition to falling into a bundle of forgettables and insignificance; and with a clarity highlighting the strengths of this impressive trio comprising Sovereign Pontiff Aheraaz (guitars, bass), Sublime Tirannus of Vedma (vocals) and Secret Kadosh of the North Gate (drums); Doctrine refuses to fall below the margin of éclat and may very well serve as a precept.