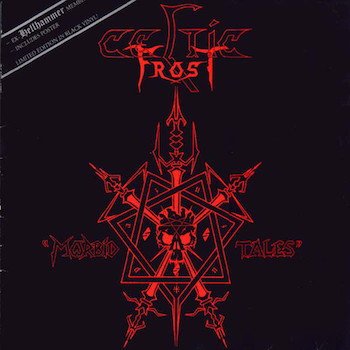 How many texts have been written about Hellhammer / Celtic Frost? About the difficult youth of Tom G. Warrior, about his and Martin E. Ain’s far-reaching musical visions? Together with Bathory, early Sodom and naturally Venom, Hellhammer is still one of the most influential role-models for millions of extreme metal hordes. Celtic Frost soon left the path that Hellhammer had walked, but Morbid Tales (and Emperor’s Return) was not far away from the material on “Apocalyptic Raids”. It’s simple, non-orchestral and hardly progressive black metal in its most primordial form. It is part of the Swiss phenomenon that it changed its musical direction more or less consequently with every new release, but regardless of the musical quality of the different periods, it seems that their very early works were the most fascinating for the worldwide underground. I mention this, because the historical importance for the further evolution of extreme metal should not be ignored when writing a review. Even though I don’t think that Morbid Tales can compete with the gargantuan To Mega Therion, I must admit that its relevance is awe-inspiring.

The European version of Morbid Tales offered only six tracks, the US copies were supplemented by two songs (the title track and 'Emperor’s Return' – these cuts had been part of a compilation of Noise Records). Honestly speaking, the title track is really missing. I wish I could swap it with the non-musical horror scenario 'Danse Macabre'. However, the mini album features a handful of real songs and all of them have this idiosyncratic aura of defiance, resilience and negativity. 'Into the Crypts of Rays' kicks off the vinyl and its class lies in the eyes of the beholder. Is it just a simple, rapid neckbreaker with a dull solo after a short breather? Or is it the prototype of first wave black metal with a great chorus, minimalistic but surprisingly catchy, and with a subliminal form of magic that lives in every beginning? Make your choice, but be aware of the fact that its speedy design does not really represent the album. Roughly 50% of the material is characterized by the stoic, mid-paced flow of pretty primitive guitar lines, for example the well-known 'Procreation of the Wicked' and 'Return to the Eve', while 'Visions of Mortality' turns from a creeping monster into a high-speed bastard.

It’s difficult to understand the impact of Hellhammer’s and Frost’s early releases from today’s perspective, because they seem to have no unique selling point. Everything runs in well-trodden paths, but it was exactly the Swiss legend that made these paths walkable. The fundament of the songs was a necrotic tissue that had never shown up before in terms of extreme metal and this, the concise “Ugh” and the grinding, droning guitar gave and still give the music it's very special character. And to integrate a narrative part in 'Return to the Eve', performed by a woman with an absolutely emotionless pitch, showed that Tom and Martin (R.I.P.) had definitely already begun to think outside the box.

Finally, the anti-establishment-attitude of the group was also reflected by the production. It did not know any nuances, it was just a stew of death-affine tones. Anyway, the sound did not miss its effect. Having said this, Morbid Tales provided a very individual listening experience, both in terms of the musical content and the technical frame. The mainly speed-oriented 'Nocturnal Fear' closed the cycle.

Although I possess the first pressing, bought in 1984 or 1985, my copy has no poster and no lyric sheet. That’s not okay, because the cover indicated that a poster is included. Maybe I will file a suit against Noise Records for this impertinence one day… But the back cover was also not consistently truthful in its statements. The “thanx-list” promised: don’t panic, we’ll never wimp out – with an underlined “never”. Well… Cold Lake? 'Prototype'? But however, Morbid Tales does not deserve a review that ends with a bitter taste, because it was a grim, painfully resolute and widely excellent release of real outsiders from a comfortable region in Europe that crushed into an Anglo-Saxon and North American dominated scene. This was another interesting detail about this unit which seemed to be driven by its inner demons. Anyway, Hellhammer’s / Celtic Frost’s enormous reputation has many reasons, but one thing is for sure. We would not talk about them anymore if they had not been able to write great songs. You’ll find five of them on this mini album.