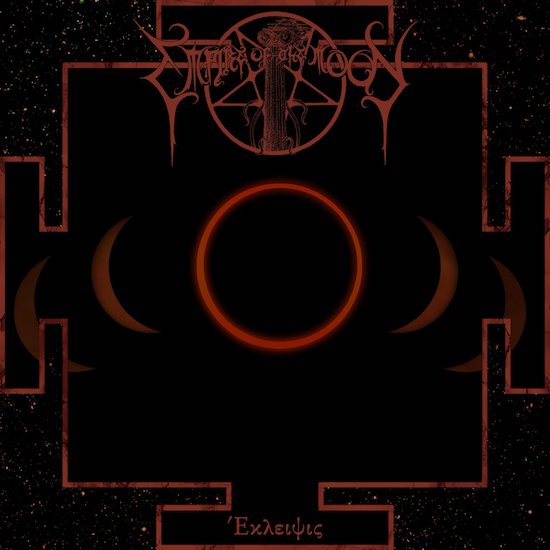 My opinion regarding the genre of the music on Empire of the Moon’s 2nd full length record changes with each new listen. Upon first instance my original impression was blackened heavy metal, second play-through warranted ambient heavy metal with black metal influences and the third one spawned the idea of Avant Garde heavy metal. Whichever categorization is most applicable is beside the point when factoring how well thought-out and fluent of an album Empire of the Moon have recorded. Translated to ‘Eclipse’, ΕΚΛΕΙΨΙΣ offers a vast, ambient approach to black metal and heavy metal; its spatial artwork and use of chilling keyboards transports your mind to realms and craters home to the moon. The black metal is of the all rounded type, spanning 1st wave to late second wave eras with a scholarly air about itself; and for a band that has been about since 1997 and features members of other adulated sects, it comes as no surprise the sapient voice of its recordings be so stentorian.

Given this be my first encounter with Empire of the Moon, I had no standards set to be fair; and though the band had released their debut full-length record in 2014, ΕΚΛΕΙΨΙΣ seemed like a good entry to make a first impression of the band provided it would reflect where they currently are. And with the possibility of their debut album not being to one’s taste, it was necessary to avoid it, should the music make the listener reluctant to explore beyond such.

Following the ambient ‘Arrival’, evidence of a Hecate Enthroned materialized through the vocal imprints on ‘Imperium Tridentis’; already delivering a surprise, my more attentive consciousness was activated in preparation for what-else might fall from the empirical luminescence on ΕΚΛΕΙΨΙΣ. It was a blistering first entry that relied on speed and atmosphere while playing with the idea of eccentrics, which would take some effect with the album's progression.

Cohesion would need to be at the core of the music should it at least be bare-able; and on this facet, it does not deliver a shortage of such. Though there is variety to be found in pacing, tones and rhythmic textures, the album adheres to a primary idea of majesty. This appears so due to the song titles imbuing an astrological summoning or bidding; it’s the feeling generally associated with the music. The synthy guitar driven leads and framework around the core of the music being black metal is what allows the album to break away from the modular norms of the genre. The mid-tempo pacing, and occasional inclusions of heavy metal guitar patterns as-well heard on ‘Per Aspera Ad Lunae – I. The Resonance Within’ runs parallel with all other incorporations whether they be the choirs or slow tremolo and chanting canticle-like build on ‘Per Aspera Ad Lunae – III. Descending’. The fluency at which ΕΚΛΕΙΨΙΣ moves is ecstatic, no one element appears forced or unnecessary and for songs exceeding the 6-minute length they never feel old or worn-out for their duration. The album is 5 years in the making and each song tells of an effort seriously undertaken to make it sound like such is the case.

I can't find a single inconvenience on ΕΚΛΕΙΨΙΣ, just when you have had a blast, another wave of audial bliss meets your ears. It may be the gigantic postured guitar work, the lunar 80's sounding keyboard synth or the drumming at any given moment that would sprawl in boasting fashion. You can hear the pride of a Disharmony through the keyboards that are suavely introduced on any randomly selected track, from offering a sense of interstellar urgency to mystical calm, the contrasts of these pieces are remarkable. The final track ‘Per Aspera Ad Lunae – IV. Son of Fire’ sounds like something Opeth would execute, progressive and mellow rhythms lay gently on a shell of black metal cracked and inserted with Gregorian chanting towards the end of its journey. Had ΕΚΛΕΙΨΙΣ released in 2019 it would have easily made my top 5 list, and with the opening to the new year the bar could not be set higher for a release of this pedigree, or could it? ΕΚΛΕΙΨΙΣ is the shadow of Celestial Bodies torn from a twilight sky, fetched to a blackening serendipity.