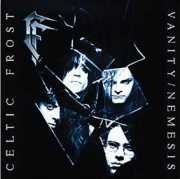 ::   ::
Type: Full-Length
Release Date: April 11th, 1990
Label: Noise Records
Genre: Avant-Garde, Thrash
1 The Heart Beneath
2 Wine In My Hand (Third From The Sun)
3 Wings Of Solitude
4 The Name Of My Bride
5 This Island Earth
6 The Restless Seas
7 Phallic Tantrum
8 A Kiss Or A Whisper
9 Vanity
10 Nemesis
11 Heroes
12 A Descent To Babylon (Babylon Asleep)
MetalBite on YouTube

After the deep dive in this toxic cold lake, Tom G. Warrior threw his trunks away and so he stood there naked. Not a pretty sight. Due to a lack of alternatives, he was heading for new shores. This exercise was not easy – just listen to the opener of Vanity / Nemesis. Regardless whether you select the song title “My Heart Beneath”, the riffing or the precious singing of the master himself, one thing becomes very obvious. This song could have been part of Cold Lake as well. And the band pic on the back cover also rather indicated another desecration of Celtic Frost’s once untouchable reputation than a return to the masterpieces of a time long ago. Nevertheless, the album has a darker aura than its predecessor. The Swiss dudes intended to regain a certain wickedness and the dry and unpretentious sound was just one component in this respect. However, there was a very important thing missing: the majestic grandeur, the self-evident blackness of their former compositions. Once innovators, now one in a million. Aggravating this situation, I cannot say that they walked the trodden paths of mid-harsh metal in an outstanding manner. The riffing lacks impulsiveness and so parts of the album sound like the work of old men. More or less the complete A side has nothing that sets an impulse. Lackluster compositions are caught in their mid-paced patterns and any form of sustainable chorus does not occur. As if all this were not enough, the band catapults itself into complete meaninglessness with the boring, lame and uninspired cover version at the end of the first half.

The A side illustrates the dilemma of the whole album. It lacks character. Yes, even Cold Lake had one, although it was an unpleasant one. But the A side of Vanity / Nemesis emanates absolutely nothing. What keeps sticking in the ear after these five tunes? The female voice in “Wings of Solitude”? Okay, if this is the most outstanding feature than we know that former idols have lost their instinct, their innovative force and their special sense for monumental deeds. The B side starts where the first four songs of the A side have ended: in total mediocrity. They are too good to hate them and much too bad to feel the urge to listen to them more times than necessary. Yes, it is almost a complete debacle, because one can be of the opinion that there is nothing worse than a piece of art that leaves the beholder / listener completely cold. Thank God, after almost everything is already said and done, the album rises like Phoenix from the ashes. It’s a little Phoenix, but it is better than nothing.

Celtic Frost are able to change the course with “A Kiss or a Whisper”. It flirts a little bit with “The Usurper”, although it cannot reach the quality level of this classic, by far not. Nevertheless, it reveals at least a minimum of currishness. And it is a signal that the band does not intend to leave the arena without having shown a real fight. The two-piece title track underlines this. “Vanity” is once again not too far away from the songs of the hairspray album, but its rasping guitars and the catchy chorus form a strong piece. Finally, “Nemesis” pays tribute to the first mini album, because its intro seems to be an excerpt of “Human”. However, that’s not the crucial thing one must know about this song. Of greater relevance is the competent design with the soft beginning, the following heavyweight guitars and the coherent melody line that anticipates the chorus. Yes, the last three songs are responsible that the album does not drown in the sea of mediocrity, but all in all, this output was another damage to the once glorious name of the band. This was all the more disappointing in view of the pretty promising line-up with Martin Eric Ain (R.I.P.) and Stephen Priestly. But maybe they should have kicked Curt Victor Bryant in the ass before they began to record this album? I don’t know. I just can say that the whole evolution of Celtic Frost after To Mega Therion was a great misunderstanding, no more, no less. And that’s a mild description.