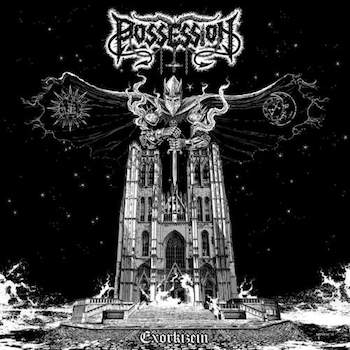 Once “We sold our soul to rock’n’roll” was a kind of rebellious slogan. Today one can only laugh about that. Possession, the Satan worshippers from Belgium, therefore have nothing to do with such child's play. Here it's simply "We sold our souls to the devil". Admittedly, that's not written anywhere on the gatefold album or the inserted lyric sheet. But firstly, the lyrics sheet ends with “A.M.S.G.”, the initial letters of the (free) Latin translation of the aforementioned slogan. And secondly, much better - you hear the heartfelt antipathy towards the values of the other side from every single note. Because Exorkizein doesn't shy away from the sound picture that you know from all other releases of this squad. As a result, the music here is dark, infernal and barbaric in places. Raw but controlled violence processes simple melodies into ominous beasts. The vocals, compared to the guitars, take a back seat, but especially the long-drawn screams give the music an additional hellish sound. Indeed, I can guarantee that the album does not lack screams of agony.

Exorkizein is not the most brutal release in Possession’s discography. Naturally, it does not lack violence, evil or hostility. But subjectively, it seems to me that some of the EPs and singles have five or ten percent more of the devil's genes in them. For example, 'In Vain' rolls through the flaming pits of hell in a devastating but relatively predictable way, before it eventually sets in for total destruction via a change of pace. I know I'm only talking about relatively puny details, so the very unspectacular ending of the last song also bothers me a little. But Possession have always had an excellent basic framework and a fascinating vision of the sound of their songs, and so when listening, one concentrates on the last nuances that decide whether a record is almost perfect or "just very good". But to put it bluntly: anyone who gets access to Possession via Exorkizein will not miss anything in terms of viciousness and will congratulate themselves on buying this powerful and down-rolling spawn of hell.

In the end, it might be a freak of nature that Exorkizein is possibly a bit less vehement than other discs by the band, because there is no good reason for it. It probably needs no mention that this album still has nothing whatsoever to do with a commercially viable approach. It provides pure darkness and does not derive an inch from the targeted path. Yes, the somersaulting insanity and the awe-inspiring dimension that later songs like 'Stabat Mater' make so excellent, does not show up here, although 'Infestation – Manifestation – Possession' comes near to these larger-than-life, no, larger-than-death compositions. However, what the listener gets is an authentic work with blazing (bass) guitars and comparatively simple yet efficient drumming. Possession do not integrate breaks over breaks, but they know how to emphasize their guitar lines extremely effectively. They work with repetition as a stylistic device, but only to a certain extent. The songs never get boring. By contrast, they become increasingly threatening due to the repetitive structure, which is particularly good to observe in 'Sacerdotium'. Only the few sacral sequences on the album are negligible (but most likely part of the concept).

The bulldozing sound of the album sets the right frame for the diabolic mission of Possession. There is nothing to grumble in terms of the mix, every tone reflects the anti-religious mentality of the group. In conclusion, Exorkizein is a very good, but not outstanding work – at least not outstanding in the internal competition with the band’s further releases. However, the band has proven with every new output that it is an enormous force to be reckoned with. Exorkizein marks no exception and was thus a good choice - please excuse this personal note at the end - for the 1,500th review.