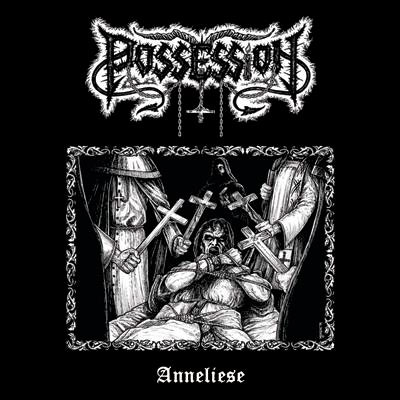 Already Bon Scott (R.I.P.) knew that “Hell Ain’t a Bad Place to Be”. Well, Possession share his point of view and so they have written another soundtrack for a journey into the deepest pits of Satan’s home. The name of the 7” sounds slightly misleading. Anneliese indicates German “Schlagermusik”, but it goes without saying that the four creatures from Belgium do not offer radio-friendly pop tunes for people who have already passed the 50 years mark (thank God I will never be one of them – little joke). The title track as well as 'Apparition' put the focus on pure cruelty. Possession do not attack with high velocity outbursts. Instead, they mix desperate screams, death metal-esque guitars and different speeds with infernal “harmonies”, if you allow me to use this term here. Anneliese delivers six minutes of total hell and especially the parts where the snare drum takes the lead are fascinating.

Yet 'Apparition' sounds even better. Once again, its opening riff leads directly into a sonic inferno. The inhuman cries of the lead vocalist fit the permanently menacing approach of the instrumentalists. Just like the title track, 'Apparition' pummels the listener with utter heaviness – it’s a combination of the rotten smell of death metal and blackest brutality. The elements of bestiality and insanity are omnipresent, and I am sure that both tunes of this EP mirror exactly everything a “normal” listener would describe with many words, but not with the term “music”. No doubt, Possession’s two outbursts do not provide easily digestible content. Its raw overall approach is built on both the compositions themselves and the production. The material boasts with a strong, ultra-heavy, violent and ugly yet absolutely professional mix.

Two songs are definitely not enough to judge the potential of a band, but we may not forget that the demo of this spawn of evil was already very promising. Just like their glorious compatriots from Slaughter Messiah, Possession are polarizing due to their absolutely uncompromising style. Love them with Satanic devotion or hate them due to whatever reasons. I can only say: In Bon I trust. Thus, it was easy for me to make the choice or, to tell the whole truth, their music drew me irresistibly to the first, the devilish alternative.