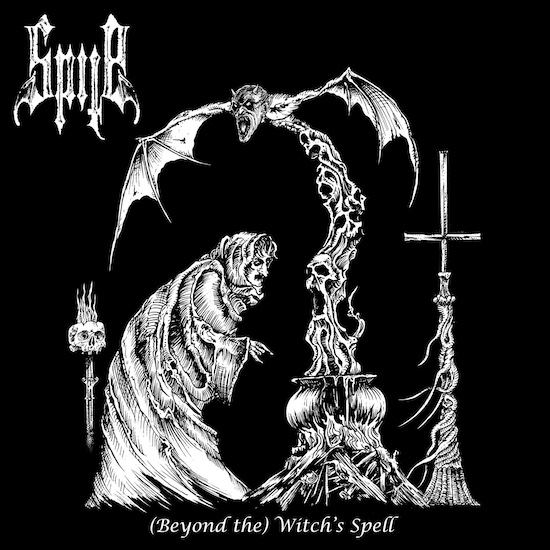 There are many ways to spread music and some of them are quite strange. Possession decided to release two split EPs with an overarching concept. One can enjoy Passio Christi Part I without knowing the second part and vice versa – but it goes without saying that it is more satisfying to get the full dose of Possession’s antireligious power. Not to mention the fact that the two artworks form an adequate overall picture. It’s a nice gimmick and the entire design of the EPs looks great. So far, so good.

Possession still attack with uttermost cruelty and a high degree of violence. Yet they also present amazingly soft tones. Both parts of Passio Christi offer clerical intros and outros, but naturally the metallic sounds are the real thing here. The devastating leads of 'I.N.R.I.' spread pure horror, because the guitars appear as ten-ton hammers and create a hellish sound. Either they rumble through the basement of the musical scale or they howl in agony. I know it sounds absurd, but the song starts with the maximum of intensity, yet as it progresses, 'I.N.R.I.' even increases the level of intensity constantly. The drums accelerate velocity and siren-like guitars announce the apocalypse. The throaty vocals are great as well, but the sheer heaviness and ferocity of the instrumental section is the most characterizing feature of this epic monument. 'Temptatio' puts the focus on the deafening and rudimentarily chaotic side of the band’s approach. However, a fantastic melody line appears in the middle of the song and gives the song a better balance until the solo guitars open the doors to hell once again. In short: both tracks of Possession lie in close proximity to perfect black / death metal. 95% are absolutely justified.

Spite from the US of A make the release complete. Multi-instrumentalist Salpsan is the only member of this “band”. In a country with roughly 330 million inhabitants, it was obviously not possible to find brothers-in-arms. Or Salpsan did not look for them - both alternatives are pretty critical. Anyway, his own composition '(Beyond the) Witch’s Spell' presents solid black metal with an equally solid underground-compatible production. The same applies for the second track, a cover version. Both songs avoid conservative patterns and do not lack variety, but they cannot compete with the encompassing gruesomeness which is featured on the other side of the vinyl. However, important details like vehemence, grimness and sick harmonies do not come off badly. Let’s say 75% for the man with the genre-typical vocals and the skill to convey the spirit of black metal.

Passio Christi Part I / (Beyond the) Witch’s Spell is recommended for all those who like bands such as Deus Mortem or Slaughter Messiah. In particular Possession’s contribution deserves the attention of people who are always looking for music that seemingly comes from the deepest swamps of evil. But what about Part II of “Passio Christi”?

I don't know Possession, Spite or Venefixion well though I have heard their names spoken of in the best of fashion many times, it's only now through Invictus Productions and Iron Bonehead that I'm able to find and enjoy 3 different recipes I could lavish. In a double split Possession would share their efforts with two bands worthy of the position alongside the Belgians. Spite would appear on Passio Christi Part I / (Beyond the) Witch's Spell and the French devils in Venefixion tag along for "Passio Christi Part II / Necrophagous Abandon". This first split between these darkened darlings exhume a desecrated rot of primitivism I can't get enough of. Belgian black/death squad team up with American black metal project Spite to further soil the extreme metal arena. Both having one full length to their names respectively, aim to barter their expertise in creating a session of unholiness to see out the year of 2019.

With the holidays already underway, Possession see it fit to commence the party with a neat little Christmas hymn before getting to all the spiciness. Immediately after, the festivities kick off with 'INRI' followed by 'Temptatio'. Both drenched in lawlessness and the celebratory laughter of wickedness, these tracks sum up what Possession is all about. Its black/death metal with a touch of Archgoat in the drumming, 80s flashiness in the guitaring, some downright disgusting vocals and of course with it comes the blasphemous and bleak nature; can't go wrong with such a combination.

Spite on the other side of the field, bring uncooked meat as an offering with their brand of raw black metal to compliment the recklessness of Possession. Their manners at the festival isn't any better than Possession's; from obnoxious drinking habits to foul utterances, (Beyond the) Witch's Spell and their cover of Cruel Creator only embolden the lewdness. Raw black metal taking its first creeps from the nailed womb of a Bathory, Celtic Frost and Venom dominated era. To be released through Invictus Productions on CD and vinyl formats, the first half of the splits make stronger the relationship with Iron Bonehead and Invictus Productions. Both Possession and Spite bring their A game to the field hence the takeaway is ideal for supporters of. I know Spite had released a very successful debut full length under the name Antimoshiach, this still fresh off the momentum exerted their better hand would more likely be at work here.