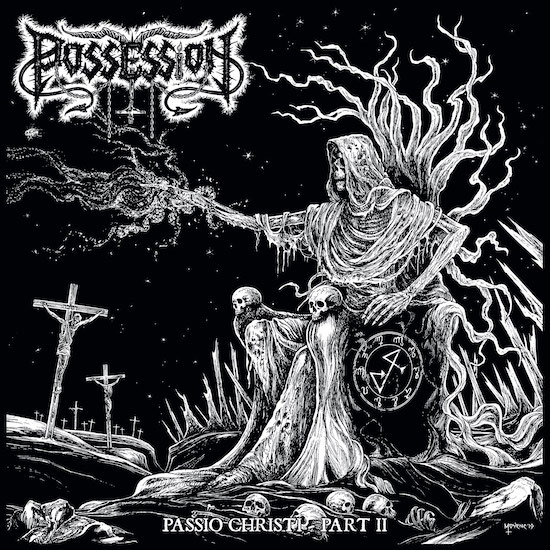 The second part of Passio Christi was released on the same day as part one and is equipped with a similar design. This makes it easy to compare both EPs. Once again, Possession’s offering includes intro, outro and two songs between. This time they start with a wicked eruption of rage, hatred and misanthropy. 'Crux Immissa' scores with the almost usual level of diabolic terror, yet due to its short length, it remains somewhat one-dimensional. I am still speaking about a good song, but I prefer the tracks of part I – and the same applies for 'Stabat Mater'. Here Possession reach their top form again while generating an infernal whirlwind. Every tone underlines the satanic spirituality of the group. The excellent, diverse guitar work takes the listener under its spell and especially the repeated line at the end of the song seems to lead her or him into a dimension of endless blackness. No doubt, the point of no return lies already behind us as the sacral choirs ring in the ending of Passio Christi. 8.7 for the very well-produced part II from my side.

Finally, Venefixion from France present their business card. They also do not shy away from pitch-black sounds, but the leads reveal the band’s predominant affinity for death metal quickly. I don’t know why this formation also needs an intro. The two Passio Christi splits are filled to the brim with these ambivalent sounds, but it doesn’t matter. Really relevant is that Venefixion play (black) death metal of the more interesting kind. The hammering, fast-paced drums roll out the carpet where the guitars walk elegantly without forgetting to show their brutal side. The vocals make sense as well. It’s not just this monotonous growling that makes everyone fall asleep. Okay, the Grotesque cover version makes them sound like Vomitory, but this is rather a compliment than a reproach. I confess I bought the vinyl only because of the involvement of Possession, but now I freely admit that Venefixion add significant value to the split. And the name of the cover song ('Ripped from the Cross') seems to pay tribute to the dark concept story of the sinister Belgians… 7.9 for Venefixion.

All in all, it was a pretty costly affair to get both vinyl’s of Passio Christi. A normal release would have been more fan-friendly and the effect of the large-sized artwork would have been possible on a gatefold release as well. Nevertheless, I don’t regret the purchase. Possession is among those few bands that really have understood the idea behind the black subgenre – and they have found competent comrades who contributed good stuff to both releases. I am curious to see what the future will bring in terms of Possession.

The second string of 2 splits releasing at the same time November 29th, 2019 through Iron bonehead and Invictus Productions, takes the form of material recorded by Belgian black/death metal band Possession and France's own Venefixion. With Possession having already contributed to the split with Spite, they lend their expertise towards the betterment of Passio Christi Part II / Necrophagous Abandon the second installation of a double episodic split. Once again Possession put their obnoxious attitude on display with their fuck you style of playing black/death metal.

Their 3 ceremonies conducted still up to par with the recordings on their session with Spite. They elevate the vitriol on this instance as both a competitive proposal and thematic relevance. Their songs here are a bit faster paced and frenetic where the guitaring is concerned with 'Crux Immissa' showing the rougher soundscapes of the band. 'Stabat Mater' is structured more considerately with variation in speed and transitions occurring between mid-paced and blazing black/death drumming. Though significantly longer than 'Crux Immisa', its skin is thicker in a sense there is more happening as far as musical climax and depth are concerned.

'Egregore' is setup as both an outro and intro to Venefixion’s oblations being 'Necrophagous Abandon' and 'Ripped from the Cross'. They answer immediately wasting no time; architecturally a cross between late 80s early 90s thrash and death metal, the guys in Venefixion crack the steam pipes and lash out indiscriminately with their riffs. Both tracks are fierce and packed with an array of memorable and exciting riffs particularly on 'Ripped from the Cross' that is more thrash metal oriented. They don’t back down from Possession, they bring just as passionate performances as the other half brought in completing and bringing the split to close. I would assume with these splits that mare is in the works, personally I would like to hear a full length from Venefixion due to the way they conducted themselves on such a short outing under the shadow of a band like Possession.

This seems to be only trickles of what awaits to be birthed into existence form Invictus Productions and Iron Bonehead Records with the progression of time regarding Possession, Venefixion and Spite.