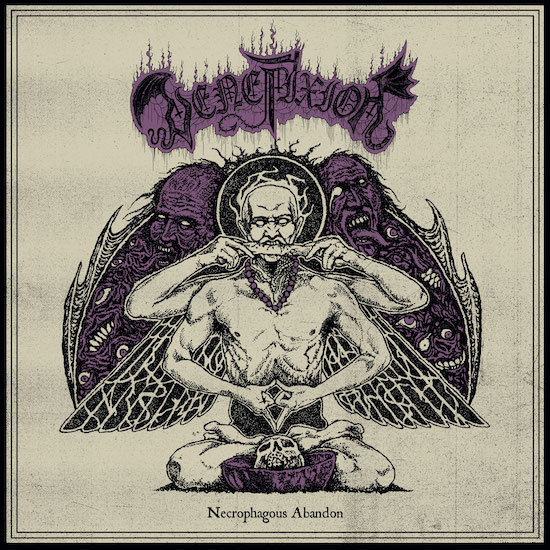 The second string of 2 splits releasing at the same time November 29th, 2019 through Iron bonehead and Invictus Productions, takes the form of material recorded by Belgian black/death metal band Possession and France's own Venefixion. With Possession having already contributed to the split with Spite, they lend their expertise towards the betterment of Passio Christi Part II / Necrophagous Abandon the second installation of a double episodic split. Once again Possession put their obnoxious attitude on display with their fuck you style of playing black/death metal.

Their 3 ceremonies conducted still up to par with the recordings on their session with Spite. They elevate the vitriol on this instance as both a competitive proposal and thematic relevance. Their songs here are a bit faster paced and frenetic where the guitaring is concerned with 'Crux Immissa' showing the rougher soundscapes of the band. 'Stabat Mater' is structured more considerately with variation in speed and transitions occurring between mid-paced and blazing black/death drumming. Though significantly longer than 'Crux Immisa', its skin is thicker in a sense there is more happening as far as musical climax and depth are concerned.

'Egregore' is setup as both an outro and intro to Venefixion’s oblations being 'Necrophagous Abandon' and 'Ripped from the Cross'. They answer immediately wasting no time; architecturally a cross between late 80s early 90s thrash and death metal, the guys in Venefixion crack the steam pipes and lash out indiscriminately with their riffs. Both tracks are fierce and packed with an array of memorable and exciting riffs particularly on 'Ripped from the Cross' that is more thrash metal oriented. They don’t back down from Possession, they bring just as passionate performances as the other half brought in completing and bringing the split to close. I would assume with these splits that mare is in the works, personally I would like to hear a full length from Venefixion due to the way they conducted themselves on such a short outing under the shadow of a band like Possession.

This seems to be only trickles of what awaits to be birthed into existence form Invictus Productions and Iron Bonehead Records with the progression of time regarding Possession, Venefixion and Spite.