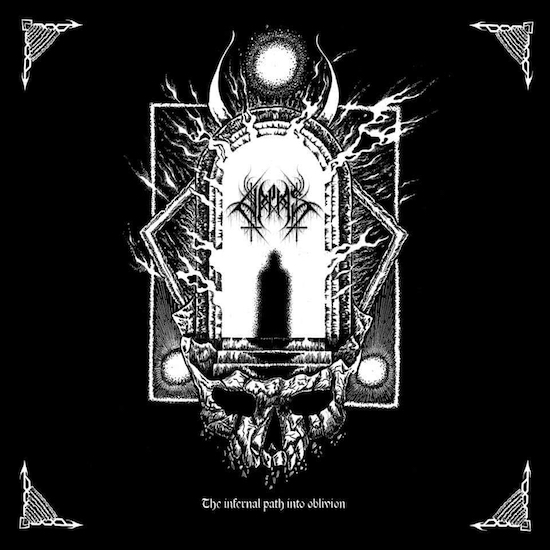 According to legend, it was the British Admiral Seymour who wished for "The Germans to the Front" as a last resort against the Chinese in the Boxer Rebellion in 1900. Apparently unsuitable for strategic measures, the Germans were just fine with him, at least as front-line fighters. It's also better in principle if others get their asses kicked. Seymour obviously knew this.

Almost 120 years later, Halphas, also Germans, proved that they would also have been suitable as front-line fighters. Fortunately they don't kill Chinese, but they are aggressive soldiers in the black-metallic army of the devil. They don't think strategically and so it happens that they run with the infantry, far from receiving an offer of a general's place. The sound of their weapons - relatively generic black metal - resembles that of other Teutonic units like Magoth or Grabak.

Halphas fire a relatively widespread style of black metal. They don't despise melodies per se and they deliver stormy outbursts based on unbridled power. They do not spit on catchy passages and at the same time accommodate a reasonable number of tempo changes. They love the raw, demonic expression of their singer without making him sound completely inhuman by distorting his voice. All this is not new or original. But it is very solid craft and successful, power-packed tracks like 'Into Eternity We Ride' and in particular the stormy and merciless 'Temple Of Oak' prove that Halphas do not only aim well in maneuvers, but also clean their weapons thoroughly in the evening. The intensity of a track like 'Monument Of Blood' reflects the essence of black metal to a great extent. Here the purity of evil is indulged in and there listening is simply fun.

With the professional production of The Infernal Path Into Oblivion, the longtime black metal listener will not experience any surprises either. Sound-wise it could also be a Dark Funeral disc from their back catalog. So it is set on volume and density. The guitars dominate, but the drums also make themselves heard to some extent. There is an imbalance, but it does not hurt the overall impression.

Unfortunately, the combat unit runs out of steam a bit towards the end of the battle. An atmospheric yet relatively unspectacular, from my point of view oversized instrumental, intoned only by the guitars, drains a few percent of the album's power and the following closer can't match the aforementioned tracks compositionally. Nevertheless, Halphas convince on far distance and, as the Landser says, "a little loss is always". This was already the case in 1900 in the Boxer Rebellion, but the losses on the Chinese side were many times higher. Admiral Seymour must have been satisfied when he was told the number of losses at afternoon tea.