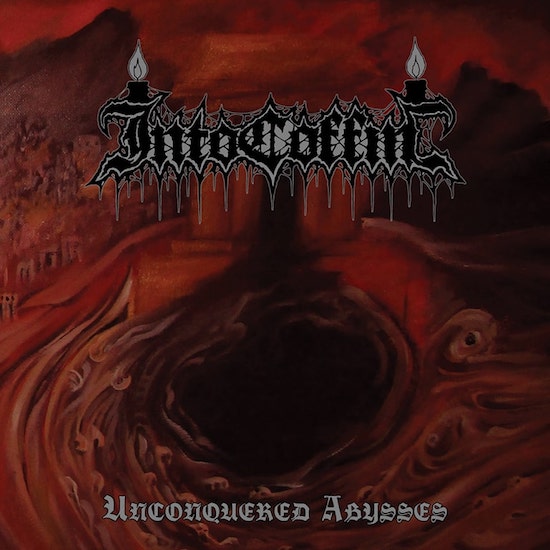 It’s one of those records that once marked by the needle can’t seem to ever be relieved from the turntable. And while the vinyl version is not out yet I'm going to call a Nostradamus and say it’s going to do just that regardless of the format. From Germany's deepest bellows of bile comes Into Coffin, a trio digging a never ending pit it seems since 2015 with no intentions of stopping as they venture beyond mortal realms of flesh and bone. For some time now I have been searching for a band that evokes such a sensation that I could place them among the cursed catacombs of Encoffination and Grave Upheaval, I think I have found such an entity. Due out on Terror From Hell Records (a label I am happy to have found) is Into Coffin's 2nd full length and continuing adventure, "Unconquered Abysses".

Firstly what a wonderful fucking band name, simple and direct, yet crafting obscurities of epic proportions. Hands deep down in the soil, "Unconquered Abysses" is doom/black/death masterclass through its 1hour 15 minute long magnetizing pull to depths the inquisitive have been unfortunate in returning from. "Unconquered Abysses" features 4 of the heaviest death/doom tracks you would have heard in 2019; every note played is like adding new pressure levels of weight to an already sinking tomb. Even the titles of the tracks are incredibly heavy and immense, 'Antediluvian Flames', 'Unconquered Light of Nothingness', 'Catacombal Echoes from AB.ZU.' and 'Archetype for the Total Ruin'; dim the lightsturn the volume up and let Into Coffin slowly gnaw at your psyche thought by thought.

There's something elementary at work here yet lingers is a conspicuous enough complexity within the crawling and choking pulses of death/doom; each transition unearths new vacuous gasps, swallowing the illumination and tightening the grip of darkness. This is the body of work at its most effective peak, demonstrating a war among genres while showcasing an order, an understanding of each purpose. Every note played adds to the joy of being absorbed through the darkness growing in capacity as it shrouds the peripheral outlook. You will be mercilessly squashed by the unforgiving density of 'Antediluvian Flames' dragging you through a millennia of bone and flesh with its gravitational pull and increasingly widening reach.

The vocals dispel hope while allying itself with thunderous wacks at the snare and tremor-like power-chords decomposing and undoing the technical (at times) fret-board. Slumber never a thing of the thoughts, 'Catacombal Echoes from AB.ZU.' and the grandiose of such is the cogency propelling such a majestic amassing of sounds. "Unconquered Abysses" feels like a scolding of bands that have trod such a rhythmically demanding and time consuming, tedious path, but with no avail. You'll want to repeat this record once it's finished, fuck, it never does feel like it's done albeit those frequencies bounce around your head long after its finale. A most sincere acolyte of the unholy trinity being black/death/doom "Unconquered Abysses" is, with so much being offered apart from the necessary essences, the longer the trance, the deeper the descent. Consider yourself fortunate if your exploration has led you to finding Into Coffin as it is far too often bands this talented go unnoticed, plus with new bodies of musical incompetence being formed everyday and adding their crap to the already congested medium makes such an unearthing one of priceless value.