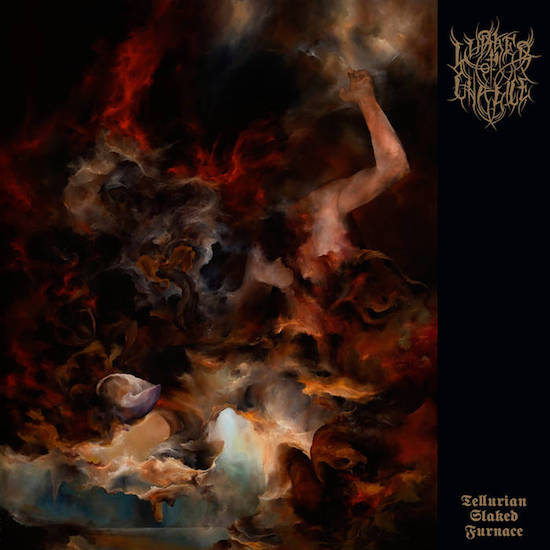 Renowned and acclaimed US black metal legend Jef Whitehead aka Wrest while not exactly coming back, has decided to team up with Nuclear War Now! to release a long overdue compilation under the Lurker of Chalice moniker. His experimental dark ambient project has been dead for over 15 years by now, but many fans of his other projects like Leviathan, myself included, always hated how the only officially available LOC release was the one and only self-titled album, however and finally, in the year of our lord 2020, Tellurian Slaked Furnace is finally out.

The first and most important aspect to note is that this is not a full length album and the songs in here aren't new at all. This LP basically serves the same function as Leviathan's "Verräter" and "Howl Mockery at the Cross" served to that project; a collection of previously unreleased and long out of print demos, properly remixed and mastered. However and paradoxically, and also for the better, the songs are arranged in a way that it flows like a proper full length album, which brings me to the best aspect of this LP and also what makes it weirder and more inaccessible than Leviathan ever was, the music. Wrest on LOC deliberately stepped away from the anger and hatred of Leviathan in order to make music that's more contemplative, brooding and subdued, but no less sinister. The music here is ambient music with black metal undertones and experimentation with noise rock and no wave music and even 1980's post punk like guitar riffs and hooks, in many ways is similar to the third Leviathan record "A Silhouette in Splinters". The vast majority of the songs are instrumental and the focus is on creating a dark atmosphere with a foreboding feel. The music is also very minimalistic, like I said, atmosphere is the name of the game here, and this is also what makes this album very inaccessible from a black metal perspective. This album's music is reminiscent of a horror movie soundtrack, at times it reminds me of the works of Japanese composer Akira Yamaoka, and as such if you're only familiar with that genre this is a marked departure and way outside the average metalhead's comfort zone.

That being said, while this may be a weird and at times somewhat self-indulgent style of music it doesn't take away from the expert compositions Wrest created here. The album may not feature the frantic metal he is best known for, but it does not make his music any less disturbing, and it proves that dark and heavy music doesn't have to be abrasive and caustic to be compelling. The soundscapes Wrest created here are disturbing in all the right ways; it resembles the feeling of being lost in a dark wasteland or as if you fell down into a pitch black maze, the use of assorted sound effects like Whitehead's signature gutturals with layers of distortion, the echoing howls of wolves and Wrest toying with his instruments to create a deeply unsettling barrage of noise complement the dark atmosphere. Furthermore Wrest is also able to incorporate various elements of black metal like his growls in specific songs, distorted guitars and bass as well as the spirit of the genre as the music has a very ritualistic atmosphere that is very much in line with black metal, like what is played in the background of a dark ritual.

Overall Wrest's Lurker of Chalice may be dead but now the world can explore more than just a singular album. It’s a bizarrely hypnotic experience that any fan of dark music will enjoy. However, an open mind is a must! If you go in expecting a black metal album you'll have a rude awakening; this is not mosh music, it’s an album you sit down and let it engulf you.