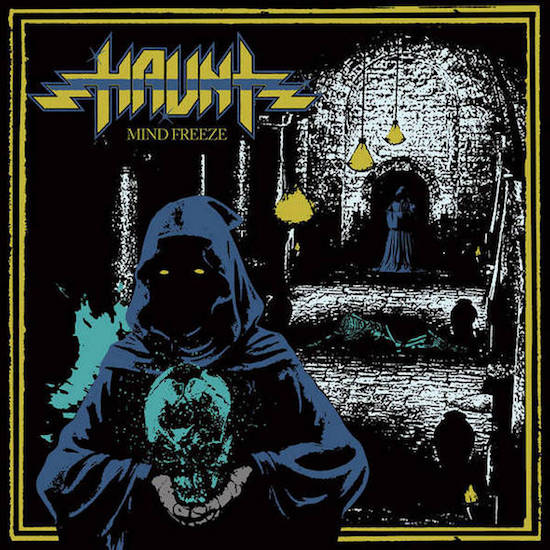 US based heavy metallers Haunt branded the scene with their enchanted leather on If Icarus Could Fly further giving the band a dominating pose among this age of throwback heavy/speed metal, thereby challenging the Canadians who have had the genre by a stranglehold since this renaissance thing started gaining traction. Seems like modern bands worldwide have a thing for old-school metal of all sorts. We see black metal going through a rebirth of sorts with the resurgence of the 2nd wave synth style, death metal’s past has been given one too many references by now and here we have NWOBHM or traditional/heavy/speed metal getting the dust wiped from the old supercharged dodge and a new paint job.

As one of the frontier bands of this new era of old metal, Haunt has always had an air of authority surrounding them since they debuted with the EP Luminous Eyes. It’s been a relatively rapid climb to the peak of the mountain since; justifiably, their debut full length showed multitudes that they were far more than one of the bunches, I mean they really did ‘Burst into Flame’ during 2018 rivaling the likes of Cauldron and the lamentably disbanded Spellcaster (USA). But the pool of conservative heavy metal is not without an ugly face in this age, the revival of the genre has sparked much mediocrity almost toppling over the quality stuff out. Some records I’ve heard sound like straight-up rubbish given taglines like ‘organic’ to brush aside the blatantly disastrous music they make. That’s the problem you’ll get within this renaissance era of traditional heavy metal, often a thin line drawn between sincerity and trendies. With Haunt there’s ‘No False Metal’ as Skull Fist put it, their consistency has been a thing of praise among many listeners; you’ll rarely if not never find a traditionalist of heavy metal giving them the boot and that has a lot to do with the band’s loyalist yet quality output over the span of just 3+ years?

All that has come to be Haunt is present on Mind Freeze, whether they be agile tacticians of speed metal with rushing licks and rebellious choruses on ‘Hearts on Fire’, 'Fight or Flight’, or those kick back, wind in the hair, contemplative, though simultaneously mystical sessions with ‘Mind Freeze’, ‘Saviours of Man’ and ‘Have No Fear’, you'll be pleased to find that the well-oiled and now ornamented underground heavy metal mechanics offer no less that their name has garnered them. It must be noted the vocals have taken a major leap up, it’s a hot and cold comparison to those heard on their past entries though they always seemed to be improving with every new album. I’d be dreadfully mistaken to slump them into the piles of trash produced in just under the span of a decade of NWOBHM resurgence and part of me wants to go above and beyond by nominating Haunt a top 5 position for best heavy metal bands formed in the last 12 or so years. I can’t award them that given I haven't heard nearly enough within the genre due to being so glued to the dissonance on the other side of metal.

They do a fantastic job of Heavy Metal on Mind Freeze, still parallel to older music they’ve made but improved and a bit mature, they’ve grown up which is odd to say for such a young band blazing the pathway with their Iron Maiden influenced twin guitar occasions in ‘Divide and Conquer' and smooth, moderately-pitched/cool/melancholic tempered vocals on the memorial-esque ‘Light the Beacon'. Yet I get the impression they may have reeled in some influences particularly those of Magic Dance off their album "Vanishings" particularly in the choruses and melodies of the songs; makes you want to remember all tracks word for word. Whatever it may be Haunt's music on Mind Freeze is blissful and beyond most stuff I've heard recently within NWOBHM.