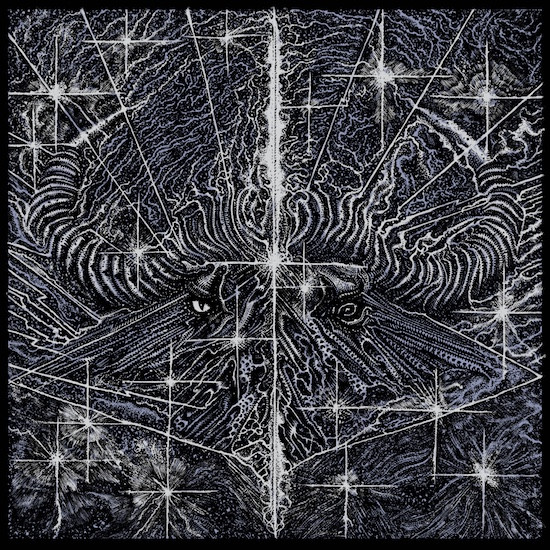 Overwhelmingly loud and pressuring, a sense scorcher, atmospheric doom metal band The Osedax have launched their third full length mammoth of a record, "Meridians". Formed in 2008 with only 2 albums prior to this, the band has stood somewhere lost within the explosion of the post metal scene due to the uncontrollable amount of material being spawned under its moniker. Personally, I hate the sub-genre; however, The Osedax's music is digestible compared to the multitudes of mess associated with the musical format. The fact they have only 3 full-length albums since being formed tells of their sound judgment, which is reflected through the 4 songs heard on "Meridians".

The music here is vast, obliterating and expansive; the doom metal passages matched with a weighty atmosphere via the use of keyboard synth, resonating guitars and more so the vocal attitude being so abrasive makes "Meridians" a congesting, violent and calm record from beginning to end. It evokes a false sense of time for its 45 minute run-time, has a serious fluctuation of crescendo and strikes at the gut with drum motions being so clobbering. Almost misjudged and left to wander the piles of promos but sometimes following your instincts plays out in your favor and this is one of those times. Imagine a castle built of solid stone, erected and left to endure the punishing hand of nature itself, with each new season, the decomposition becomes more evident as the walls of the towering landmark begin to erode and crumble. That's how you feel when listening to "Meridians", at first a thing of strength and stamina pulsing but with each new wave of affliction, only to soon be overshadowed, weakened and brought to your knees via the monstrous and omnipotent aura encompassing and ever-looming.

'Often', and 'Beacon/Ox Eye', channel strong surges of guitar power chords and progressions, while the vocals and drums (respectively) of Scott Coldwell, Mike and Horn Kevin Grevey act like a sledgehammers delivering the defining blow following the weakening overcast of the synth and bass. They're not just heavy but display a controlled flow between climaxing and meditative moments. Following 'White Horse/Tempest' that lands a power-slam of soundscapes to baffle the listener, all of that voluminous immensity is brought to a humbling of sorts through the serene almost reverie-esque, yet foreboding 'Ratlines', going for more of an instrumental atmospherically unsettling (at times) approach, thus masking the violent nature of past entries with more of an eerie outlook yet being parallel and effective in conjunction and coordination with "Meridians" as a whole.

What this album does is show differentiation yet succinct connection to a particular theme; never straying, always keeping a level head through destructive and mayhemic yet soft and comforting compositions. If any band could set an example of how to mix post metal with atmospheric sludge and doom, The Osedax would most likely be one of those. Making this an even more exhilarating and accomplished outing is the fact 3 individuals created this sensational, sonic scourge of sagacity; as opposed to having an outfit of 5 or more musicians who instead just compose songs. The difference here is other bands just play and make music mostly forgettable on their albums; The Osedax with "Meridians" in stark contrast, is a journey through the earth and space, an event to the endless molecules of memory shaping fragmented images into polished landscapes.