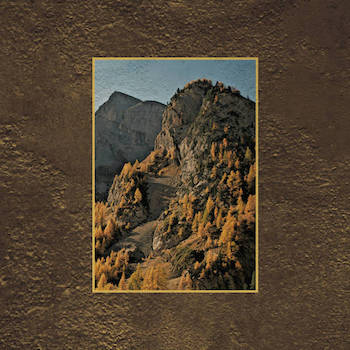 Having a subset of black metal bands conveying their music through heavy layering and emphasis on atmosphere is nothing new. In fact, it could be argued that the genre as a whole uses those musical tools to one degree or another. However, recent development in the Swiss black metal scene through bands the likes of Darkspace and Paysage d’Hiver showed that black metal could induce a hypnotic ambiance. The term ambient black metal is often used to describe a band that focuses on this all-encompassing atmosphere. Italian band Earth and Pillars’ Earth II fits squarely within this paradigm as the album is noticeably influenced by this swiss black metal scene.

Themes are not uncommon within ambient black metal as the dense atmosphere can lead to creation of hypnotic sceneries. It is arguably the most distinctive and interesting aspect of this subgenre. Darkspace created an agoraphobic atmosphere which made the listener feel as if he was drifting in the endless dark void of space while Paysage d’Hiver’s atmosphere gave the distinctive feeling of being lost in the middle of a snowstorm. Earth and Pillars, in keeping with the over-arching themes of grandiosity, chose nature as the defining theme but instead of inducing the feelings of agoraphobia and helplessness, admiration and beauty were chosen as the foundation for the atmosphere. This created an interesting challenge for the Italian band, as a successful album would mean pushing the boundaries of the subgenre. Earth II was however a disappointment as the album is plagued with an unusual amount of repetition which makes if ultimately fail in conveying this feeling of grandiosity and beauty.

Repetition is a very common theme in ambient black metal as recurring riffs can create an hypnotic feeling so one must be very careful in criticizing a band for its repetitiveness. However, in the case of Earth and Pillars’ second full length album Earth II, repetition is rather a symptom of an underlying lack in creativity. This lack of creativity is shown through three main aspects, the over usage of minimalist riffs, the lack of any diversity in the drumming patterns and the similarities between each song.

The opening two chords progression played in the first song, becoming, is a prime example of this lack in creativity. These chords, being as short as eight note each, are slightly modified and played repeatedly during the first twelve minute while the underlying tremolo riffing plays alternatively two riffs. While the objective is to create a hypnotic feeling through repetition, the resulting feeling is rather one of an eternal build up towards no crescendo. The only departure from this rather minimalist structure is during the transition between 'Becoming' and 'Falling', the second song of the album. However, repetition is once again overused as the drumming never truly departs from a steady blast beat and the guitar riffs only alternate between five riffs for the whole of twelve minutes. The last half of the album is not worth describing in detail as the structure and concept used in 'Becoming', the repetition of a two-chord progression with two alternating tremolo riffs, is used in both 'Ascending' and 'Prowling'.

To Earth and Pillars’ credit though, the production value and layering of the album is done in the best practices of ambient black metal. As such, it is undeniable that they have managed to create this feeling of all-encompassing atmosphere and feeling of grandiosity. However, their utter lack in creativity makes the record feel like you are listening to the same riff during an hour straight.

Usually ambient black metal goes one of two ways: either it prioritizes riffs and creates atmosphere through hypnotic repetition or stacks a bunch of layers of ethereal sound on top of one another to create an all-encompassing sort of vibe. Earth and Pillars have a slightly different take - the ambient orchestrations are subtle and tasteful like a black metal album typically is and the riffs and drumming are in the forefront, but the music is still very based on textures and layering and consistently hitting on this immersive, lush sound. Earth I, the only release I’ve heard from this band prior to this album, is very much written in a similar way. That’s what draws you in at first - the surface atmosphere to Earth and Pillars is fantastic. You immediately get transported to a middle of a forest with a cavernous 2000-foot waterfall and a lake right in front of you.

Problem is, once you get to that beautiful nature scene, it’s like you just stay put and don’t go anywhere. Earth II sounds nice, but once you get used to the dreamy, foresty vibes, you long for some kind of big pull or drop or something to take you to a bit of a different place in the songs, but this is the same problem I had with the band before - nice shimmery surface sound, but no dynamics and no grit. The drummer is the biggest contributor to this, being the rhythmic backbone. His beats are an impressive exercise in stamina, being consistently either a steady blast beat or a rolling double-kick, and not often spacing the drums out with more minimal parts or changing the way those two motifs are delivered. Because both of those drumbeats have a lot of stuff going on in them, there isn’t a lot of room for the music to groove and breathe, and the focus on atmosphere robs Earth II of a lot of its power. 'Ascening' has some parts that start to get me going, but they’re hidden in the back end of the song and I have to sit through ten minutes of aimless pitter-patter (not to mention the twenty plus minutes of the first few tracks) to get there. The final track has some good moments too, but they certainly take their time getting there even within the songs and the excitement is never permanent or long-lasting. They don't even change up the textures much, it's just that the drummer uses a beat I like a bit more in those songs.

There are a few notable expansions on the sound of Earth and Pillars since the last time I heard them. The production sounds a lot less cluttered and gives me some space to notice each of the instruments, even though the drums are still quieter than I think is necessary and the keyboard and guitar haze are still clouding over everything, but that’s partially just a product of their style and there’s still noticeable improvement in the sound. Admittedly, this is a bit more diverse in its riff styles than Earth I was too. That being said, the enhancements still haven’t turned Earth and Pillars into band I would recommend over other atmospheric black metal. A lot of the times the guitars just sound like they’re playing toneless tremolo and the music fades into the background (in a bad way), and the vocals don’t complement the style well enough with their somewhat feeble low rasp. I get endlessly frustrated by this band, because I always throw on one of their songs excited for an atmospheric riff journey, the first riff kicks in and I’m like “fuck, alright, this is cool shit, right up my alley, nice vibe, let’s see where they go with it” and then they just ride that groove for five fucking minutes until I've lost interest. Oh wait…maybe that’s ten minutes? Oh, shit I think they’re actually playing another riff; I totally didn’t notice that transition, how long have I been zoning out? Whatever, the point is that I'm bored.

Again, I will admit that if you’re going to try Earth and Pillars, it should probably be this album, because it’s got comparatively more going on and sounds better than the hazy turd that was Earth I (should roast that album at some point soon). However, if you can’t tell, there’s something that just doesn’t click with me about the way this band writes their songs. I like a couple riffs here and there, but about 80% of the time these guys bore the shit out of me and it sounds like a huge, grandiose buildup to nothing.