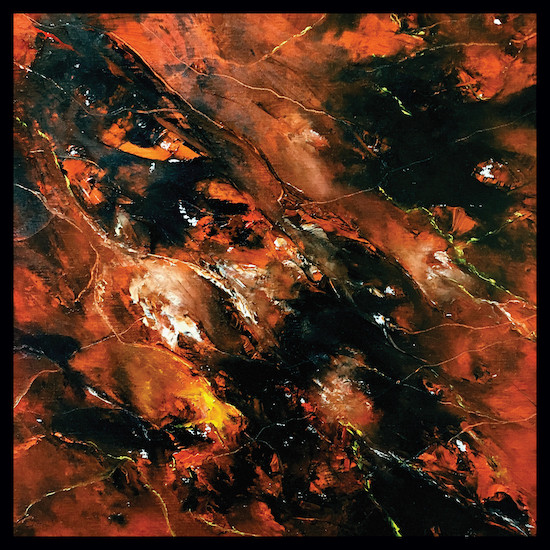 The better bands have always been a thing of the underground, however even within the underground lies another hierarchy to say of quality, under that layer of obscurity has been home to many cult entities. Should you find yourself under that layer, you'll find predominantly the highest of quality. Jordablod are one of those bands you would be foolish to ignore, their approach to black/death metal would come as a welcome surprise as we here have grown accustomed to and even come to expect riffs drowned in distortion, dungeonous roars and either technical/unconventional patterns or a chaotic upheaval of dissonant black/death metal.

Though you would find marks of the mentioned scattered throughout Jordablod’s second LP, The Cabinet of Numinous Song it would be impossible to miss the perspicuous and vastly different assortment of ornaments within this ‘Numinous Cabinet’. The songs here go from traditional, 2nd wave black metal, to bluesy grooves, hints at stoner doom metal, rock, death metal and progressive metal all being balanced on 70s guitar string work. With all this occurring comes a psychedelic touch elevating the mystical aura brought into effect from the first entry ‘A Grand Unveiling’ and I could not think of a more fitting title from an opening track, because what accompanies each song is a luxurious and diverse mix of rhythms, echoes and signatures tied to the identity of many musical forms.

There’s always something new happening, never the same old similarities or limitations of a single standardized genre. Songs are very expressionist and appear to have never missed a moment to transcend from being a song to an experience. I'm stunned at the flawless nature of The Cabinet of Numinous Song, like staring at a glass prism from close and having reflections of your inner-self morph into accurate visual representations depending on your mental state of being at the time. Each entry is in competition with another for musical supremacy; like watching what would appear tangled at first glance, gracefully uncoil itself weaving into forms towering with glory to the startled eyes. The Cabinet of Numinous Song is frighteningly good, defined by a bombardment of sonic influences held fast to an envisioned goal of spectral evocatism.

‘The Two Wings of Becoming’ and ‘Hin Ondes Mystär’ are played without constraint, and when factoring the unpredictability of the contrasting incisions, you would at least expect some discord or convolution, not a single trace of any on the recordings, instead connectivity and functionality forms the identities. Soft proceedings carry ‘The Beauty of Every Wound’ but its lurid nature is expelled, not for too long before being brought back to a state of convalescence by means of the bluesy and almost medicinal passages. It is these rhythmic oscillations that module atmospheres idyllic and tranquil to the listener, massaging the senses. It's a constant battle between serenity and violence which has come to make The Cabinet of Numinous Song such a brittle album; ‘To Bleed Gold’, seemingly delicate at an angle yet simultaneously pulsing with a brash hostility, crafted with a masonic diligence and precision exemplary to the genre of black metal this song is the pinnacle of the album, a compiled reverberation of the rapturous residence on The Cabinet of Numinous Song.

The Jordablod Experience would have been a more fitting name for the Swedish collective, its psychedelic overtones never prove faint, and having the backing of black metal 1st and 2nd wave, it would not be ludicrous to label The Cabinet of Numinous Song a 70s black metal record.