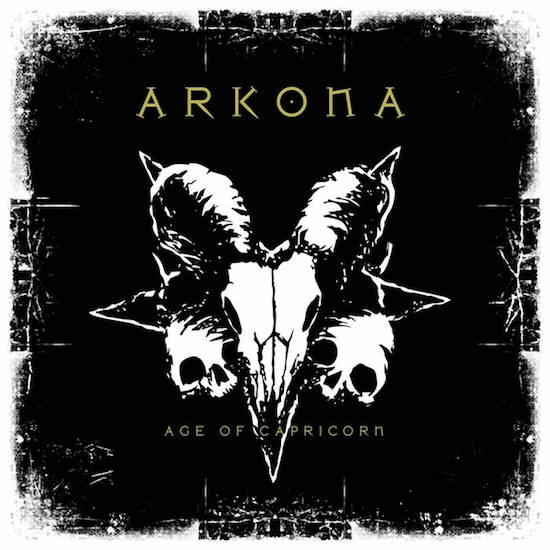 Once symphonic black metal has been an accepted style, but today this label sounds like an insult. This is how it goes when the former role models do not rest until everything is laid to waste. Well done, Dimmu Borgir. Yet there is still a resilient core in symphonic black metal and Arkona are among the formations that bring it to light from time to time. Even better, they do it very competently. Admittedly, this is nothing new. Lunaris from 2016 already reflected their song-writing skills and frankly speaking, the differences between this work and the new album are rather small. Yes, they have a fresh lead vocalist, but he sounds more or less like his predecessor – just expect the typical raw and throaty vocals. Maybe the word stagnation comes to your mind, but stagnation on a very good level means to be still very good, right?

The songs themselves are still flowing constantly and machine gun fire sections like those that open “Deathskull Mystherium” do not prevail. Nevertheless, the album does not lack profound harshness. Once groundbreaking symphonic black metal works opened the door to a new dimension of blackness, and this is the point where Arkona fail. They stay within the previously defined frame, but they know how to exhaust the scope cleverly. Seemingly with great ease, they find the right balance between crushing vehemence and opulent melodies. Broad keyboards (“Towards the Dark”) or additional fragile piano sounds (“Alone Among Wolves”) stand in contrast to the basic metallic equipment (guitar, bass, drums), but they never dominate the sound. Arkona emphasize the brutal aspects of their music and maybe I should add that some parts of the album deliver “only” pure blackness and no orchestral elements. Be that as it may, Age of Capricorn transports distanced coldness and it has not been produced to please the ears of weekend metal freaks. Sometimes the drums are almost in a blast beats mode and I don’t think this is the kind of music occasional listeners of “hard” music want to hear.

In terms of the production, the band presents a flawless implementation of its material. Well-balanced, dense and dark, these attributes can be used to describe the overall impression. No doubt, genre lovers can have a good time with Age of Capricorn, even though one or two songs are a tad too long. There is a room for improvement in terms of compactness, but it does not affect the result significantly. Arkona have released another intense output and “Alone Among Wolves” marks its climax (although the title track is fantastic as well). This song combines an ominous touch with unbridled passion and given this background, it sounds like the 20 years younger brother of the best tracks on Dimmu Borgir’s “Spiritual Black Dimensions”. (It’s always a good idea to pay tribute to a period of the role models before they destroyed anything in their surroundings.) More songs of this quality and the musicians will take the next step, regardless of the reputation or the exact definition of their style.

Poland's Arkona are back with their 8th full length album, titled Age of Capricorn. Got to hand it to the Poles, they've managed to keep within the relevancy zone of black metal throughout the years and have been consistent where quality is concerned. Their prior release, Lunaris is an album I revisit often for the riffs and atmosphere; it gained massive attention, generated much support and stood out among exemplary releases of 2016. The next step however would be pondered upon by many, what would the immensely experienced 25-year-old band whip-up on their landmark of a release in 2019.

Age of Capricorn does even better what Lunaris did; if it's the atmosphere you're attracted to you'll be pleased to find it remained a key factor on this particular venture, only this time, it has been amended with greater imposing and convincing progressions. Primarily, Age of Capricorn could be seen as a more dynamic album than that of 2016's Lunaris. Their production quality has been accessible for some time now; however, that's not to say Arkona's hostility has shrunk or become tepid, in fact they have upped the truculence as well. You'll find a steady fluctuation occurring between mellifluous groove and climax thereby laying out a follow-able path for the listener/s.

Opener 'Stellar Inferno' shows a band still maturing despite their eldritch status by carefully assembling their template as a guide or centerpiece for following songs to work from and return-to when branching out. The songs range between 7 and 9 minutes thus facilitating higher progression, variation and balance causing the finalized album to mimic cohesion and be glanced upon as a unified and centralized piece. Getting to the title track 'Age of Capricorn', the traditional black metal melody through tremolo picking is introduced though not dwelled-on for long, instead sacrificed for groovier sequences both in fast and slow sections. This helps in erecting a grandeur personality fitting for such a monumental album.

However, I think their best effort resides within the Dark Funeral-esque 'Deathskull Mystherium' whereby the drums, guitars and vocals appear to have undergone some sort of structural rearrangement, intensity-wise, carrying through to 'Grand Manifest Of Death'. It shows Arkona's most vicious and disciplined wizardry on Age of Capricorn in knowing when to accelerate and decelerate rhythmic propulsion and is the stimulus of the album. 'Grand Manifest of Death' takes every plausible highlight on the record and praises them, thus maximizing the effect for the curtain call. Usually 46 minutes of black metal could prove disastrous if it's of the stationary run of the mill, uneventful type; I Don't know how some bands could sit and say to themselves, hmmm let's make a 40 minute song featuring one chord and one drum pattern; not Arkona, Age of Capricorn is a complete and multi-dimensional record that not only tops their prior release but also shows the opening of a new chapter in the band's music.