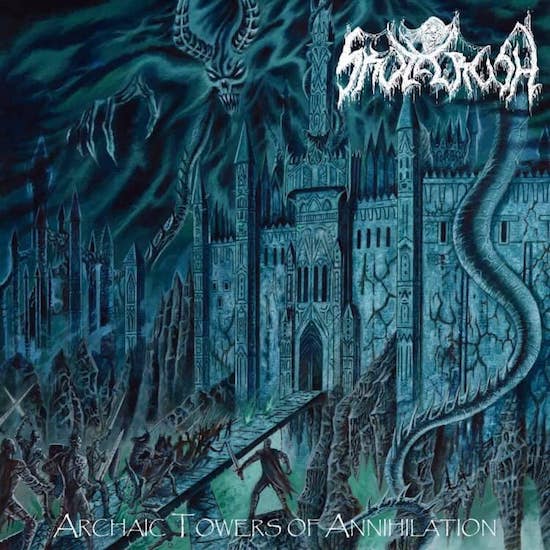 Five bands keep screaming at the back of my head when I listen to Skullcrush’s debut full length, Archaic Towers of Annihilation. Burial Invocation, Acephalix, Necrot, Succumb (USA) and Spectral Voice. If none of those are correct then I must be imagining things (which seems to have been the case lately). Coming in fresh from Phoenix Arizona the 4-piece demolition team has cracked open the shell of a rotten egg and has left it to sit within the underground for some time, yet only now the scent has met its peak. Though arriving late, it would be unfair to not mention the release as a worthy candidate among the best of 2019. I just wish this had been out earlier in the year to really get the credit it deserves, but now that most have either already completed their best of the year lists or have an idea at least, Archaic Towers of Annihilation has found itself in the rather uncomfortable position of either being forgotten or tucked underneath as a runner up. Released through Raw Skull Records December 13th, 2019, in response to the already pressured year of competitive death metal Archaic Towers of Annihilation is just as good if not better than some efforts.

You would take a glimpse at the artwork and think immediately old Swedish death metal tunes are on here and you won't be wrong to assume so. In fact, you'd be quite spot-on as after the intro ‘Dawn of Sin and Everlasting Torture’ you won't miss the HM2 reverb in the lead guitars and the melodic patterns showing off some of the album’s many colors. Thus said, the leading riffs and solos use up their time effectively when trafficking any style, it seems. Hardcore sections have that chugging vibe turned all the way up, long wrung out death/doom metal passages snail towards the end of 'Overthrown' and the Swedish death metal tones are taken care of each step down the order. Getting to ‘Buried and Forgotten’ you almost feel a bit confused as to what kind of death metal band Skullcrush is, but in a good way. The guys know how to pull off a good surprise even if you’ve kept your ears pinned to every note emitted off the guitars and drums. Bringing me to the kit that has a punchiness I love and hope Skullcrush sticks to. given the impact it has had on Archaic Towers of Annihilation.

The album is strange in a sense it mirrors somewhat of an EP sometimes, a full length and at times as though it held back a bit in the songwriting department. Don't be mistaken, Archaic Towers of Annihilation has enough to keep you nodding but you would want more than that after hearing death metal so many times. Both A and B sides are commendable as far as quality with ‘Overthrown’ and ‘Voice of the Abhorred Dread’ being the primary highlights, however, though ‘Monumental Tomb’ and ‘Nightmares for the Blind’ carry the music forward, they don't develop into powerhouses to say or more specifically don't fully capitalize on the promise of being greater than supporting songs. Solos could have been more frequent and longer while the doom passages could have approached from a semi-melodic angle to gel with the mid tempered leads. The vocals though falling within the line of hardcore metal, does not appear as a bystander, in contrast, it’s fairly convincing through the pitch therefore convincing during the round-about of Archaic Towers of Annihilation. I think fans of Gatecreeper, or Power Trip will gravitate towards this style, however it won't be a bother to hear some deep growling which I think would strengthen the backbone of Skullcrush’s sound. Still Archaic Towers of Annihilation is a crushing first step in the underground.